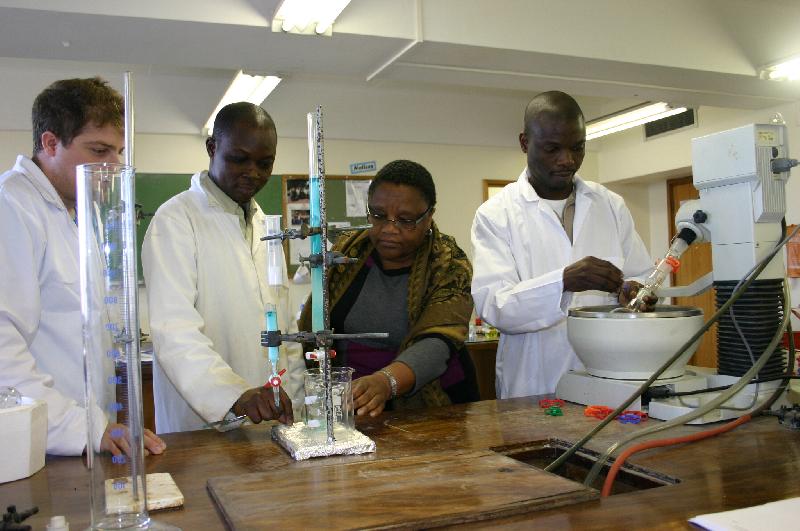 Despite the accolades and prestige, Prof Tebello Nyokong of Rhodes University says that, when people think of her, they “think about sheep and that letter”. Read this extract from an interview in the Mail and Guardian by Sarah Wild. Prof Nyokong, a distinguished professor, research chair in medicinal chemistry and nanotechnology and director of the Centre for Nanotechnology Innovation.

“I was named one of the 21 icons [a photographic project to showcase leadership in South Africa].” She gets up to retrieve a newspaper supplement from a well-ordered pile on one of the shelves that line the side of the room. It is a large black-and-white photo of Nyokong in a field of sheep, holding a shepherd’s hook and wearing a lab coat.

“I grew up being a shepherd – from a shepherd to a scientist, I think that’s what they’re trying to portray,” she says. Born in Lesotho in 1951, Nyokong went to school on alternate days, tending sheep on the others. Letter to self
The letter she refers to is one she wrote to her 18-year-old self, which has since been widely distributed and published. In it, she raises questions that resonate with many young people in South Africa, especially previously disadvantaged students who are often the first member of their family to go to university.

“What about your family?” she writes to her younger self. “Will they understand why you need to go to university? Let me tell you, they will not. They would like you to work and support your brother and sister so they can complete their schooling. You know this is fair since you were supported. The family believes you have enough education. All they wanted was for you to be more educated than they were.”

It would appear that she found a compromise: working until her younger sister finished high school and then going to the University of Lesotho, from which she graduated in 1977 at the age of 26. Now, she is recognised as one of the leading scientists in the country, and a recipient of the Order of Mapungubwe.

But she finds herself in the same unfortunate position as many of the country’s researchers: frustrated and feeling foolish because she cannot commercialise the products she and her centre have developed.

“I call it the Centre for Nanotechnology Innovation, but where is the innovation? We are innovating new materials for applications, but how do we get to the applications side? I know nanotechnology, but the intellectual property, the language, the amount of blah blah blah … it’s really, really difficult for my brain,” she says.

Skin cancer treatment
The nanotechnology she is famous for is a topical skin cancer treatment, but that invention remains in the laboratory and has not made it as far as clinical trials. Her shoulders slump as she explains what happened: a series of bureaucratic failures, protocols expiring and “I just didn’t have the heart to go back again”.

The technology hinges on a specific kind of molecule, metallo phthalocyanines (MPCs), which react to light. She dabs a finger on her skin. “You put the drug on the cancer on the skin. It will take time to distribute itself and then you put light on it.”

The light increases the energy in the MPCs and they produce oxidants, “free radicals, the ones that make us age, the ones that kill us”, she says. Because the treatment is so targeted, it does not damage healthy tissue to the same extent as other cancer treatments, such as chemotherapy.

Binding these MPCs to nanoparticles makes the therapy even more targeted, because then they are bigger and cannot leak into surrounding healthy tissue, she says.

Silence falls once she finishes explaining the science. It lengthens.

Gugu Kubheka, a chemistry master’s student under her supervision, says: “She [Nyokong] believes in small successes. There are no short cuts. [She tells us] you don’t need to be intelligent in this world. You need to do the work and put in the hours.”

Asked whether the postgraduates are similar to the sheep she used to watch over, Nyokong erupts into another deep bout of laughter. “Sheep, they behave, unlike goats … Postgraduate students, they are like goats. But I encourage them to argue.

“There is a way that you can argue your point scientifically without being rude. We want to train people who can think. If they cannot think, what use are they to this country? They have to be innovators. We have to give them the platform to be innovators, otherwise we are not doing them a service.”

Sarah Wild’s trip to Grahamstown was funded by the Gordon Institute of Business Science (Gibs). It forms part of her research for a book that will be published in 2015 by Gibs and Pan Macmillan South Africa.

For the full article, visit Mail and Guardian,