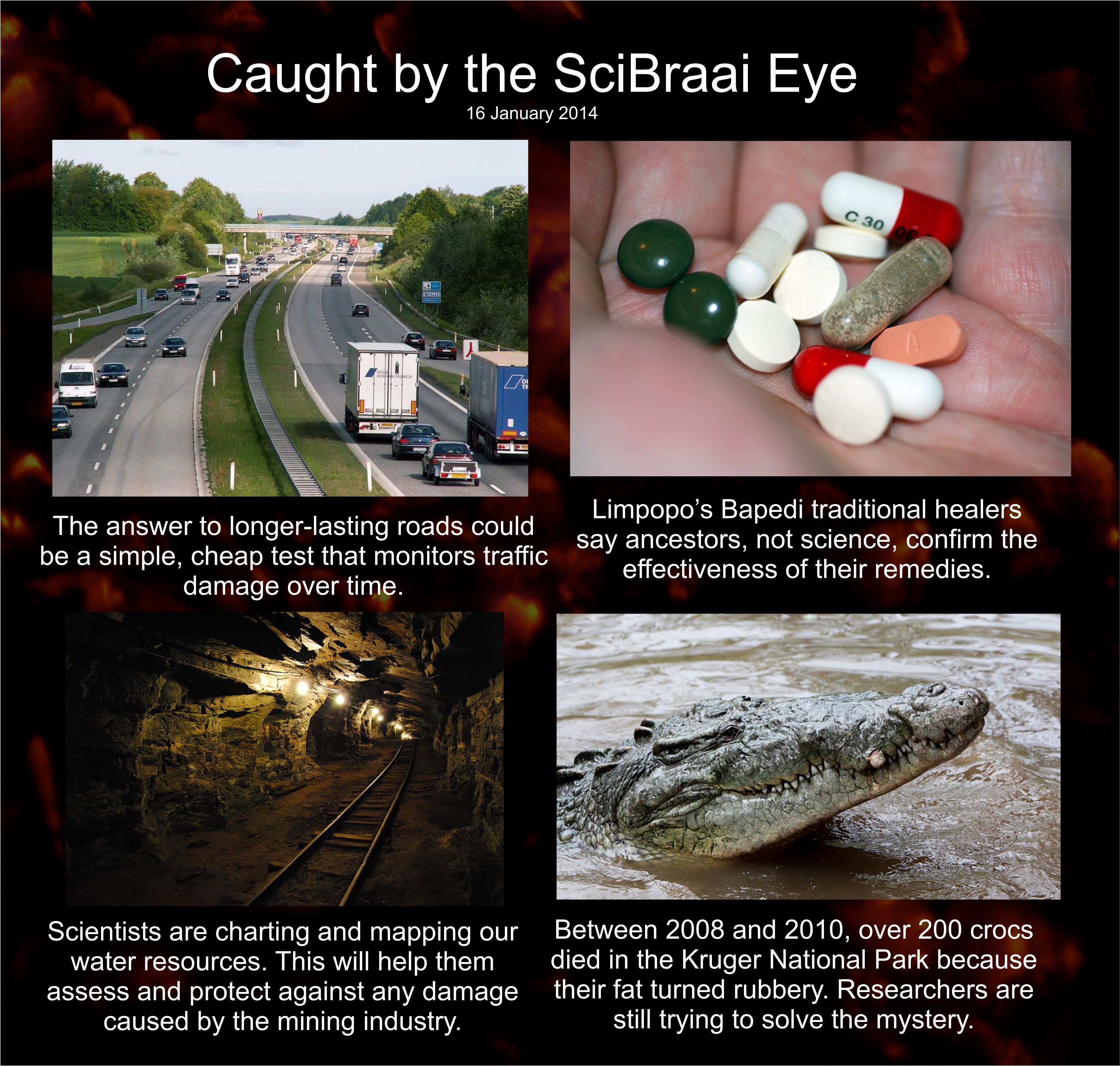 A few “lesser-spotted” quests for answers have caught the SciBraai Eye this week. Is there a way to prevent potholes? How can we make sure the mining industry doesn’t damage our water resources? How do traditional healers know if their remedies work? Why did more than 200 Kruger Park crocs die a few years ago? Remember the 216 crocodiles that died between 2008 and 2012 in the Oliphants River Gorge in Kruger National Park? Their deaths were associated with Pansteatitis (or yellow fat disease). It causes body fat to inflame, to the extent that it almost rubberises and can’t be used by the animal as a source of live-giving energy. Emily Lane of the National Zoological Gardens of South Africa and her colleagues have now published a pathological review about the incident in the Journal of Zoo and Wildlife Medicine.

No definitive cause has yet been found for these deaths. That notwithstanding, epidemiologic evidence suggests that this event may have been a one-time event that will have long-standing repercussions on the health of the crocodiles.

Don’t just take the roads you travel on for granted – it’s easier said than done to ensure that they stand the test of time. One of the major headaches of road engineers is ravelling, which happens when the bonding material made from among others bitumen and gravel to seal our roads become, well, unravelled. It can happen right after a section of road has been sealed, or during the course of its lifetime because of heavy traffic.

Researchers at Stellenbosch University, under leadership of Prof. Kim Jenkins, the SANRAL Chair in Pavement Engineering at Stellenbosch University, is now working on an inexpensive and simple test to evaluate the bitumen and bitumen emulsion strength development over time, as well as binder-aggregate compatibility. Prof. Jenkins reported on progress being made to develop such a test in the Proceedings of the International Flexible Pavement Conference.

Atlas to chart SA’s mine water

The new mine water atlas being compiled in South Africa was highlighted in an article in Water 21, the journal of the International Water Association. The project is led by Dr. Jo Burgess of the country’s Water Research Commission. The mining industry’s impact on our water sources is being mapped to help develop strategies to protect them.

Did you know that the Bapedi traditional healers of Limpopo use up to 154 different plant species to treat the ailments of more than 50 health-related problems of their clients? Or that most of the male healers received their training from mentors, while most female healers trained under guidance of their parents?

Interestingly, most of the Bapedi healers rarely consult science when prescribing remedies. In a study in the Journal of Ethnobiology and Ethnomedicine, Dr Sebua Semenya and Martin Potgieter of the University of Limpopo note that all of the healers surveyed said that they were not aware of environmental laws governing how they can grow plants and their impact on the environment. The researchers believe this can be solved through education and by allowing the healers to integrate into primary health care systems and environmental management programmes.