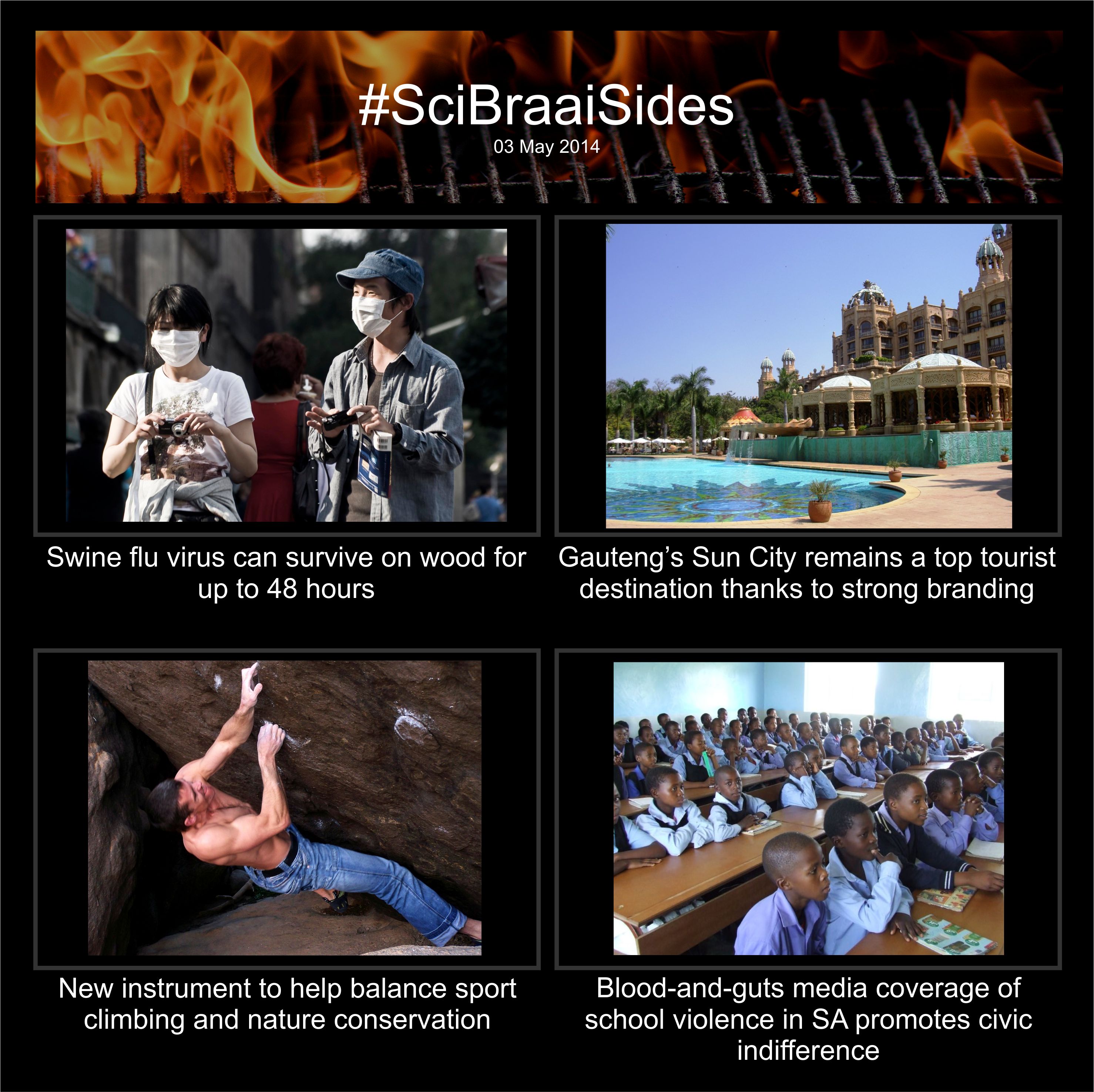 Did you know that the swine flu virus could survive on wooden surfaces for up to 48 hours? Ever wondered how the SA press writes about school violence? Or thought about what effect of your bouldering hobby could have on nature? Or how Sun City keeps its edge? Then read this week’s Scibraai Sides where we feature recent SA research. Clean those surfaces, for flu’s sake

Be warned: the pandemic strain of the influenza A H1N1 virus (commonly called “swine flu”) can survive on wood for up to 48 hours. That’s why it’s so important to regularly disinfect your household surfaces, and to make sure that you frequently wash your hands during flu season.

So says John Oxford of the Blizard Institute of Cell and Molecular Science, St Barts and The London School of Medicine and Dentistry, lead author of a study in the American Journal of Infection Control about the survival of influenza A(H1N1)pdm09 virus on four household surfaces. Two South African researchers also contributed to the paper. They are Kgosi Letlape of the Africa Medical Association and the Tshepang Trust, and Barry Schoub of the University of the Witwatersrand and National Institute for Communicable Diseases.

Multiple samples were taken from four types of common household surfaces. The researchers found that virus particles remained infectious for 48 hours on a wooden surface (think bread planks or wooden spoons) , and for 24 hours on stainless steel (think wash basins and knives) and plastic surfaces (think mixing bowls and plastic spoons). The virus remained infectious for 8 hours on a cloth. However the researchers believe their recovery of the virus from cloth was not the best job done.

“Our results suggest that pandemic influenza A H1N1 can survive on common household surfaces for extended periods of time,” writes Oxford. He adds that good hand hygiene and regular disinfection of commonly touched surfaces should be practiced during the influenza season to help reduce transmission.

A strong brand that addresses customers’ need for many thrills and long-term memories will keep bringing repeat visitors to Sun City, while fostering its brand promise of “Africa’s kingdom of pleasure.”

So says Ike Ezeuduji of the University of Johannesbu remat thanrg, after conducting a desk study and in-depth interviews with ten business managers of this holiday resort. His findings are published in the journal Tourism Review International.

He says part of Sun City’s success lies in the combination of various entertainment and relaxation opportunities that are on offer, as well as the various attractions and activities for different market segments.

“Sun City competes in the tourism industry by pursuing strong branding and dominating a niche tourism market of resort vacationers, offering a rare package of so many experiences,” writes Ezeuduji.

Being bolder about bouldering

Sport climbing, and bouldering in particularly, are becoming increasingly popular among outdoor enthusiasts. Like most outdoor activities, it needs to be controlled, as it comes at a price to nature.

That is why researchers Johannes van der Merwe and Unio Joubert of Stellenbosch University have developed an instrument to help environmental managers in the field of outdoor recreation and conservation limit these action-sport activities. They believe it could help manage natural resource sustainably within local and even international contexts.

In a study published in South African Journal for Research in Sport, Physical Education and Recreation, the researchers tested their method in the Rocklands bouldering area of South Africa. The instrument uses 58 test criteria to account for the maintenance of a resource’s market appeal and resource sensitivity by capturing these aspects at three spatial scales: the bouldering area as a whole, its sub-fields and the individual boulders.

“The model should aid conservation authorities, owners of private climbing areas and the organised climbing fraternity to ensure long-term sustainability of the use of climbing resources,” believes Van der Merwe.

Watch how you write about school violence, researcher warns

The way in which the media writes about school violence in South Africa promotes civic indifference and actually do not call people up to do anything about it.

So says Lynette Jacobs of the University of the Free State, in an article in the South African Journal of Education about how the South African printed media write about school violence, and in the process, could be misinforming their readers about the situation.

In all, 92 articles were analysed that appeared in 21 different public newspapers during one year. Jacobs found that typical ‘blood-and-guts’ reporting was popular, while issues such as emotional and sexual violence in schools appear largely unnoticed by journalists.

The more frequently an issue is presented in a specific way, the more likely it is for readers to perceive the media’s version as the truth,” explains Jacobs. And that’s why she’s worried about how school violence is reported about. Because, as we all know, although news is assumed to be reliable, comprehensive and unprejudiced, journalism can be questioned.

“I found that the way in which the public is informed encourages the perception of school violence as being an individual, rather than a societal, problem and encourages the acceptance of assumptions and stereotypes,” Jacobs explains. “I argue that the main frames provided to readers in South African newspapers fail largely to elicit social responsibility, while at the same time promoting civic indifference.”

“The way in which the media report on school violence influences public perceptions, gives rise to particular attitudes and can influence decisions by policy makers,” she adds.