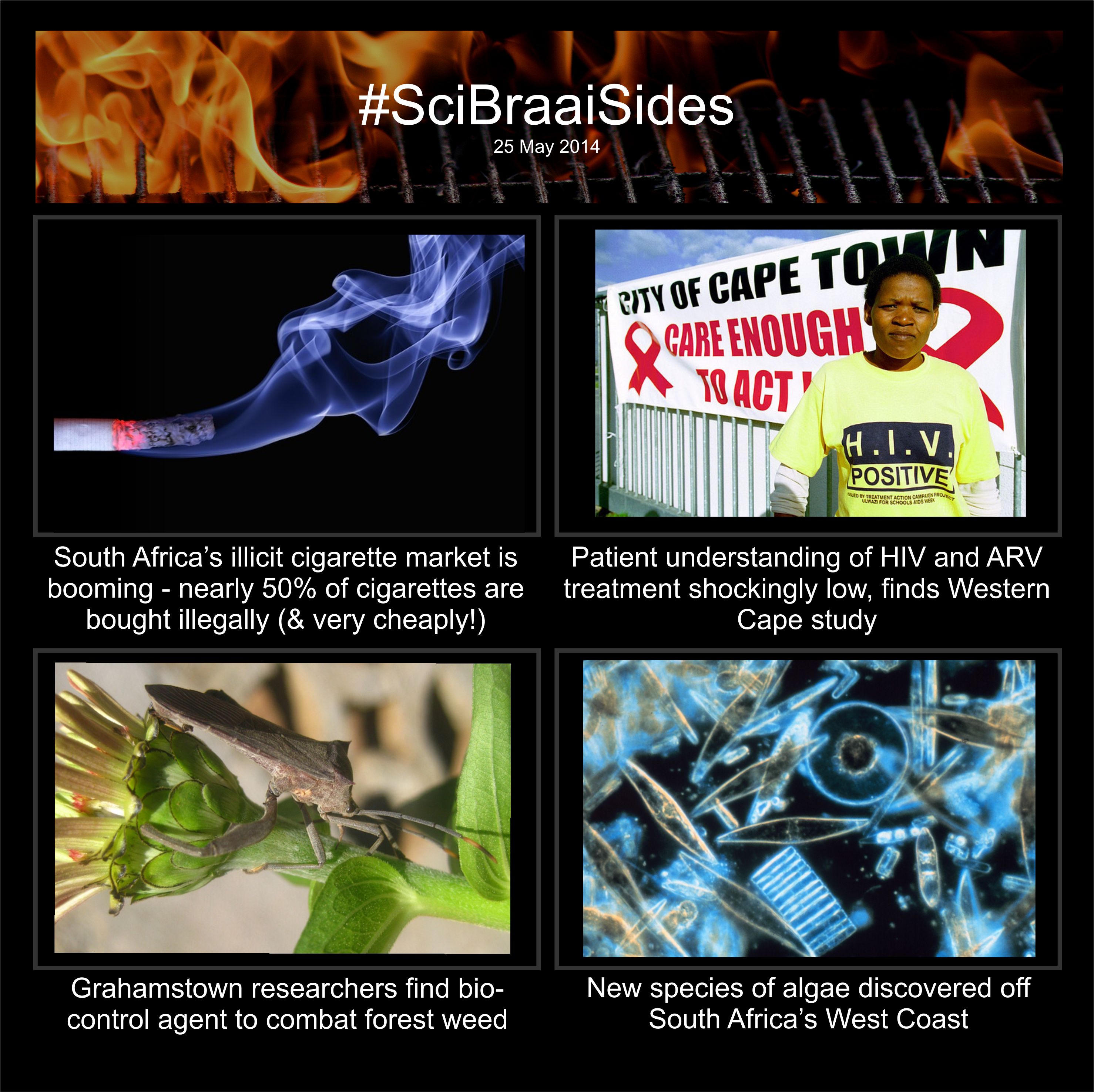 Did you know that up to 19 million cigarettes are sold illegally in South Africa per day? Or that the stem-wilter might just be the end of the leaf cactus, which is invading KZN forests? Do you know about the new species discovered in Lambert’s Bay? And is enough being done to educate HIV positive people about their ARVs and why they should adhere to their regime? Here’s news about a new species from the sandy beach of Lambert’s Bay on the West Coast. Minutocellus africana sp. nov is absolutely minute in size, as its name indicates, but if you’re into picoplankton, this will be just your thing.

The work was done by Polish researchers, and published in the journal Nova Hedwigia.

They describe Minutocellus africana sp. nov. as a new marine benthic diatom (meaning algae from the seafloor) belonging to the family Cymatosiraceae.

Oh, for more knowledge about ARTs and HIV

Knowledge is power, so the saying goes. Therefore it is anything but heartening to read about the findings from a recent study at a new ART clinic in Cape Town, which shows just how little patients on antiretroviral therapy (ART) actually know about their treatment – or their disease, for that matter.

Patients on antiretroviral therapy need to achieve a 90% adherence rate to ART in order to prevent disease progression and drug resistance. The patients’ knowledge of ART and HIV is thus crucial to ensuring good adherence, decreased risk for drug resistance and cost-effective treatment for these patients.

Two Stellenbosch University researchers, Lauren Terblanche and Ethelwynn Stellenberg of the Division of Nursing in the Faculty of Medicine and Health Sciences, set about to find out what the level of knowledge is of patients with regard to HIV and the ART they were receiving.

The study was conducted at a comprehensive community health clinic with a newly-built ART clinic in a developing low socio-economic community near Cape Town. Interviews were conducted with 200 patients. Their findings were published in the African Journal of Primary Health Care and Family Medicine.

Not one of the patients had a good knowledge about HIV or ARTs. At least 20% had average knowledge of the subject, with 80% having – worryingly – poor knowledge.

“The respondents on ART in this particular community health centre had poor knowledge of HIV and ART,” says Terblanche. “This may contribute to poor adherence rates, increased drug resistance, disease progression and increased costs for the government with regard to treating such patients.”

The researchers believe that increased attention needs to be given to patient education.

Calling in the biocontrol agents

Have you heard about the Barbados gooseberry, leaf cactus and ora-pro-nobis? Known as Pereskia aculeate in botanical circles, this relative of the cactus family is an invasive alien plant from Central and South America. According to Wikipedia, this plant is a declared weed in South Africa and can do extensive damage to forest areas by overgrowing and smothering our indigenous trees. Infestations occur in some KwaZulu-Natal forests and are embedded in the canopy and difficult to remove. The plant has a tendency to form large, impenetrable clumps and the spines on the ste resems make control of large infestations difficult. It also regrows quite easily.

A potential biological control agent, the stem-wilter (Catorhintha schaffneri) has now been identified that could help in managing this invasive plant.

“Catorhintha schaffneri is safe for release in South Africa and is likely to be a damaging and effective agent,” says Iain Patersonwho led the study by the Department of Zoology and Entomology at Rhodes University. The findings were published in the journal Biocontrol Science and Technology.

It was collected in southern Brazil and imported into quarantine in South Africa. Field host range data suggested that C. schaffneri has a host range restricted to this cactus. Impact studies conducted in quarantine indicated that C. schaffneriis damaging to P. aculeata, significantly reducing the number of leaves and the shoot lengths of plants, even at relatively low insect densities.

Did you know that up to 19 million cigarettes are sold illegally every day? And that it is estimated that almost one in every 2 cigarettes smoked in South Africa was illegally sold?

These are some of the facts from a recent Stellenbosch University study that have been included in a new research paper in BMJ Open. The new article, with Anna Wherry of the Johns Hopkins University in the USA as lead author, focusses on a pilot study that took a look at the prevalence and characteristics of illicitly traded cigarettes in Johannesburg, Durban, Nelspruit, Musina and Ficksburg.

Researchers from the Perinatal HIV Research Unit, University of the Witwatersrand, the SA National Council against Smoking are among the co-authors.

They set about to better understanding contraband cigarettes in South Africa, and piloted three methods for assessing the price, brands, pack features and smoker’s views about illicit cigarettes. Data were collected in June and July 2012.

They found that the average cost difference between a legal and an illicitly traded pack of 20 cigarettes sold at a street vendor was around R11,69.

“Illicit cigarettes were clearly found in all the sample sites we selected,” says Wherry. “Although we cannot report on the overall prevalence of either use or sale of contraband cigarettes, our study formally demonstrates that there is a signiﬁcant difference in pricing of illicit and legal cigarettes, that cartons of illicitly traded cigarettes collected are most commonly characterised by the lack of an excise stamp, and that illicitly traded cigarette brands are not uniform across the country.”

Reference: Wherry, A. E. et al (2014). A comparative assessment of the price, brands and pack characteristics of illicitly traded cigarettes in five cities and towns in South Africa, BMJ Open

Anthrax not the ultimate bio-weapon