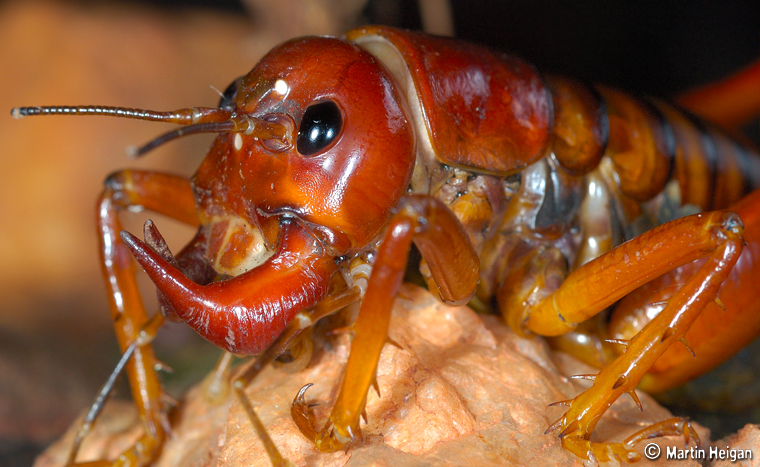 Marcus Byrne, University of the Witwatersrand

South Africa’s notorious Parktown prawn gets its name from the leafy Johannesburg suburb where it has flourished and spread since migrating to the city from the moist eastern forests of the country’s lowveld escarpment. It is a large insect with a reddish colour and bristling legs, mouthparts and antennae, which might have been responsible for its nickname.

South Africa’s University of Witwatersrand students spread a rumour in the 1960s that these large and intimidating insects were the result of genetic engineering gone wrong. Fortunately, that is not the truth. They are a beautiful example of evolution at its best.

Southern hemisphere is their home

Parktown prawns are actually King Crickets – a large family of flightless insects found across the southern hemisphere including South America, Australia and New Zealand. In New Zealand, they are known as Wetas and fill a variety of ecological niches – possibly including that of mice, which were absent from the local fauna before humans arrived.

The first Parktown prawn was officially discovered in South Africa in 1899 in a small mining town called Barberton, east of Johannesburg. Their spread and rise to fame has in some ways mirrored that of Johannesburg, which seems to have become their adopted home, over the intervening years.

The scientific name for these creatures is the Libanasidus vittatus. It is heartening that they have a name. Most people only know the common name for one of South Africa’s 90,000
plus insects, of which 60% don’t even have a name of any sort. This effectively means they don’t exist. It’s like not having an identity book or passport.

The Parktown prawn has a number of features which generally intimidate the average householder. On closer examination it’s clear that these features are evolutionary adaptations to its lifestyle as a big, solitary invertebrate.

It jumps, not athletically, but sufficiently high and quickly to make the most ambitious predator or unsuspecting human leap in the opposite direction.

They can also kick, bite and scratch, or play possum when all else fails. These predator avoidance tactics are also called on when the lonely adults get amorous. Their diets consist of dog food, dog poo, snails and slugs, along with other insects and sundry leftovers.

The Chanel No. 5 of prawn sex

Male and female Parktown prawns live retiring lives in shallow spherical burrows, which they leave only to wander around our gardens in search of food and fellowship.

Adult Parktown prawns don’t sing to each other in the same way that the males of true crickets call to the females to advertise their availability and gene quality. Instead, Parktown prawns leave smellograms, scent marking their burrows to advertise their sex and maturity. So, the foul smelling goo that the agitated creature leaves on your sofa as you try to swat it with your newspaper doubles up as Chanel No. 5 in the intimate world of prawn sex.

The kicking and biting also helps males ward off competing suitors in a behaviour known as mate-guarding. Once a male has found and copulated with a female, he avoids being cuckolded by following her around for long enough to ensure that she will use his sperm to fertilise her eggs. But these women don’t want one partner.

She has a competing interest in seeking other sperm sources to increase the genetic variety of her offspring, improving the chance that her genes will get passed on to the next generation. Typically, females will mate more readily with a novel male rather than repeat the performance with a mated male.

Competing suitors face up to each other, displaying their large tusks which grow on the jaws of the males, and are only used in such exhibitions of masculine quality. Large males with larger tusks are known as major males, and are expected to get more matings. Smaller males have to take their chances where they can.

Female Parktown prawns on the other hand can be easily identified by the long spear-shaped tip of their abdomen. This is not a sting, but rather an ovipositor, the device she uses to insert her eggs into the soil where they hatch into nymphs.

Tiny little Parktown prawns are born which look just like mum and dad but without the spear or tusks. They will moult and grow, avoiding predators such as birds and rodents. That is until they reach maturity and go through the gamut of sex to get their genes into the next generation.

Given that this large enigmatic insect has such a place in the popular culture of Johannesburg, a city of millions of people, we know pathetically little about them. In many ways this typifies our knowledge of the biological world around us. Unknowingly we are rapidly exterminating species on a daily basis with unknown consequences.

Don’t squish the Parktown prawn. Don’t spray it with insecticide – you are wasting your money anyway. It is so many thousands times bigger than a mosquito that the poison will take ages to act – that is, if the prawn doesn’t metabolise it to a harmless compound first.

Instead, gently get down on your knees. Stare the beast in the face, then pop a glass over the top of it, slip some paper under the glass and carry the beautiful creature outside where it can play its role in the odd ecosystem we call Johannesburg – or wherever you may find them.

Marcus Byrne is Professor of Zoology and Entomology at University of the Witwatersrand.