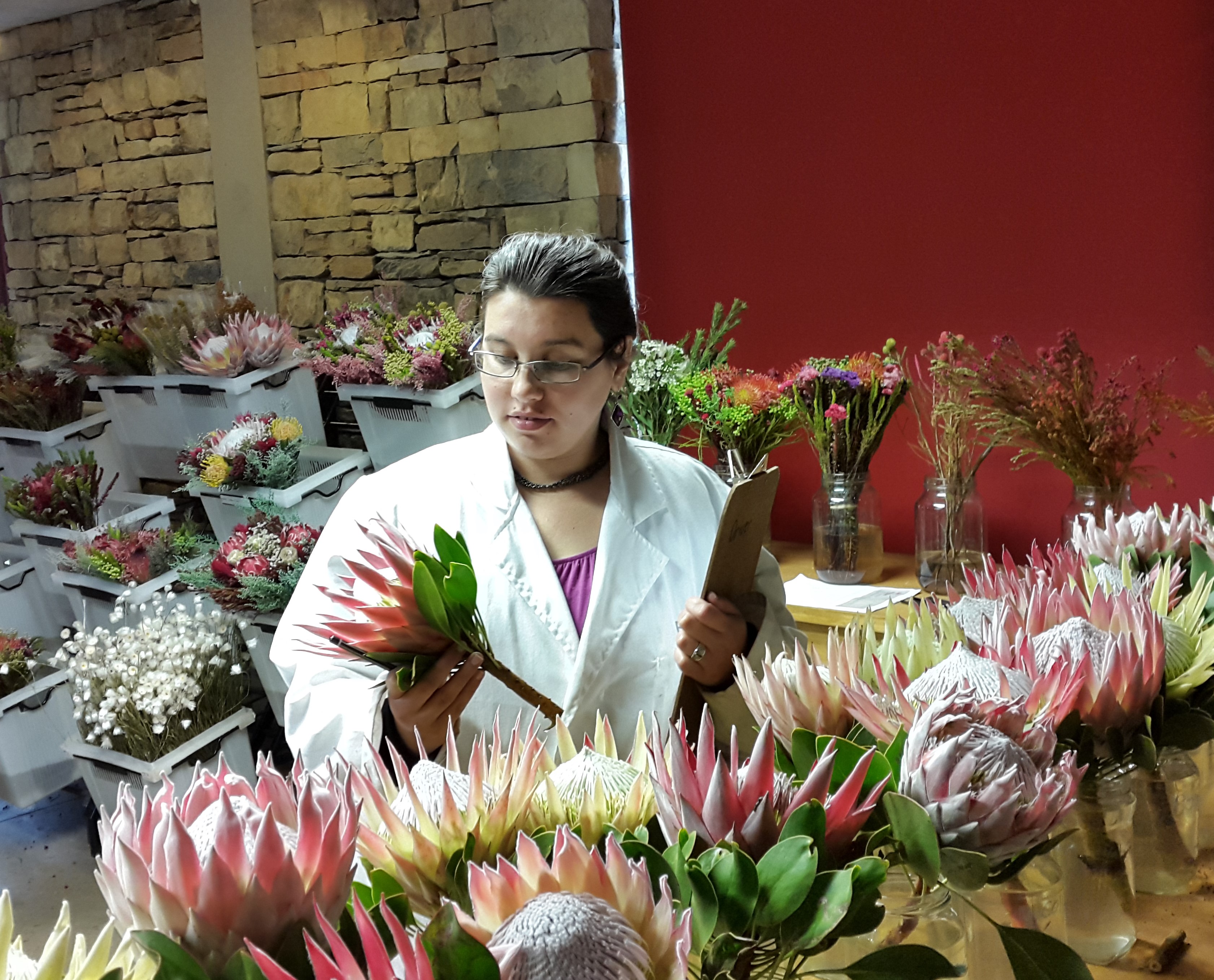 Seven. That’s how many times Nicole Windell redid her experiments after first realising that proteas suffer from the floral equivalent of low blood sugar in the mornings, which makes their their green leaves turn all blotchy. And that they should – unlike other cut flowers – rather be harvested in the afternoons.

Her former supervisor, Dr Lynn Hoffman of the Department of Horticultural Sciences at Stellenbosch University, still remembers fondly how she requested Windell to redo her controls over and over again after she first proposed that proteas rather be picked in the afternoon. Just to be sure.

“This practice is very different to what is normally found in the cut flower industry, where, for example, roses last longest if they are cut in the cool of the morning,” relays Dr Hoffman.

The blackening of leaves occurs especially during winter and early spring, when the export prices for proteas are at their highest. This means that flower cultivators and producers have to employ extra hands to cut the damaged leaves from the stems. Furthermore, extra fynbos filler stems then have to be added to a bunch to compensate for the loss of foliage.

The blackening has to do with a lack of glucose and carbohydrates in the leaves of the cut flower stem. Blackened leaves occur when a flower is picked when such sugar levels are low, and the plant does not have enough reserves to keep the floral in top quality.

Proteas do not store high levels of carbohydrates in their leaves, because it is not a deciduous plant. Instead, these fynbos flowers rely on daily photosynthesis, whereby sunlight in the course of a day helps convert carbon skeletons into energy-rich carbohydrates such as glucose. If this does not happen, for instance when it is overcast for a few days, the plant starts to consume its own energy reserves. At night, plants also do not photosynthesise, but still burn sugars through respiration which means that their sugar levels are at their lowest in the mornings. This is why the SU experts advise that harvesting should rather be done in the afternoons, as it gives the plants time during the morning to replenish their leaf sugar levels through active photosynthesis.

This discovery is based on research done by Windell as part of her MSc in Horticulture, which she obtained in 2012 at Stellenbosch University. She was assisted by protea experts Dr Lynn Hoffman and Prof Gerard Jacobs of the SU Department of Horticultural Sciences. Together they recently published a research paper on the topic in the journal Acta Horticulturae, wherein the findings and methodology is set out.

Dr Hoffman says that although the study was done on the protea cultivar ‘Sylvia’, the findings are also possibly relevant for all protea species.

The US experts have already conveyed their findings to various forums. Many protea farmers are already following their advice and have adjusted their picking times accordingly to rather cut pin cushions and Leucadendron (“tolbos”) in the early mornings, which do not experience blackening. In the process, they have already reduced the occurrence of blackened leaves condition of up to 40% amongst export products.

Research into blackened leaves is still under way, to establish exactly what accounts for the other 60% of the cases.