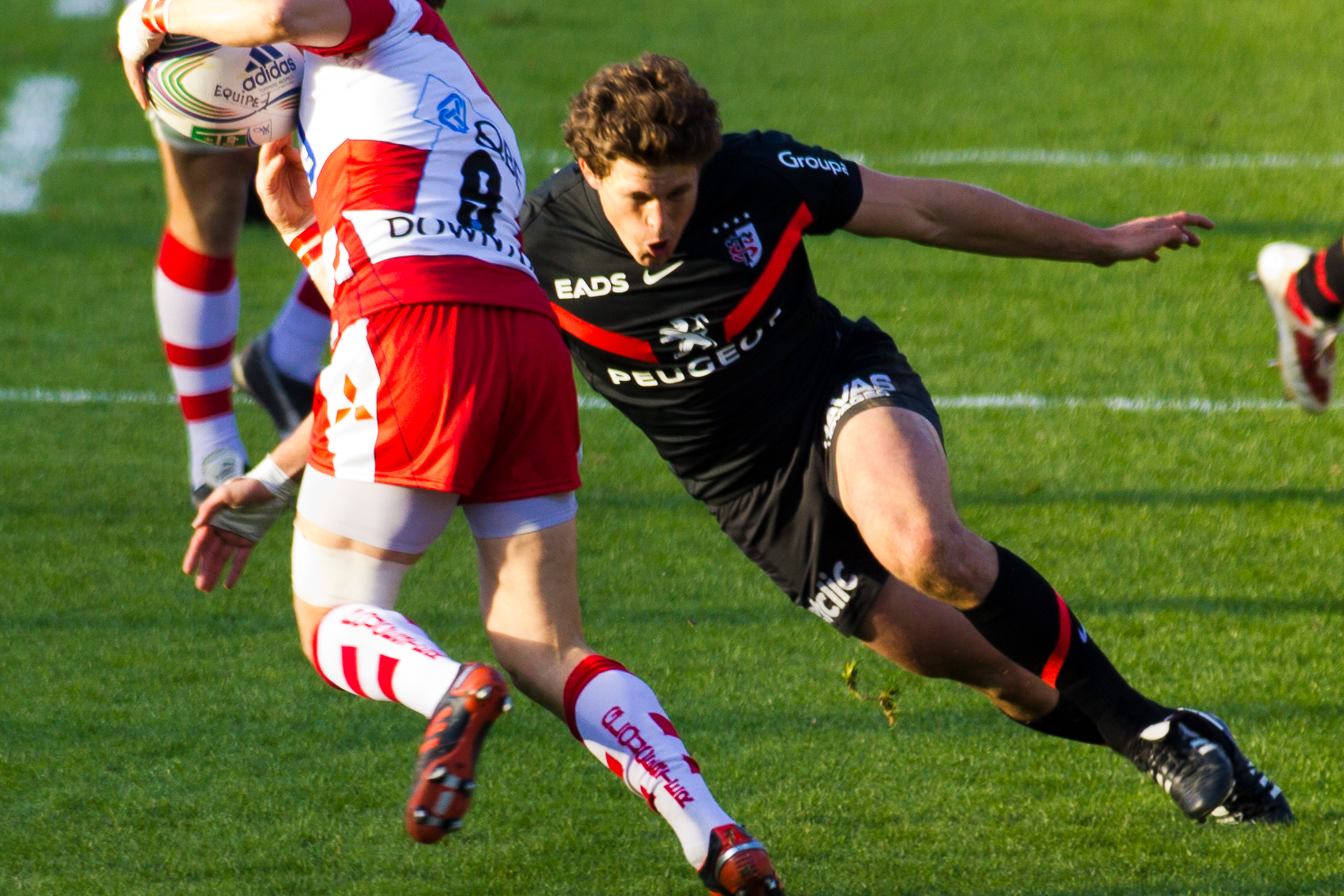 In the spirit of the World Rugby Cup, here’s a repost of an article by Morgan Morris: investigating the reasons why some players survive crunching tackles, and others not. To fans, the rugby tackle is the stuff of oohs and ahs. To a rugby player, it’s the on-field physical contest for posessesion and territory, and also the one aspect of the game that is most likely to lead to an injury.

To the likes of researchers Dr Sharief Hendricks and Professor Mike Lambert of the UCT/Medical Research Council Research Unit for Exercise Science and Sports Medicine (ESSM) at the University of Cape Town, the tackle is also a puzzle.

To answer this, Hendricks and Lambert have started looking at aptly titled ‘injury-free tackles’, and have accumulated a dizzying array of numbers in the process.

They started with a study, in 2012, on Velocity and Acceleration before Contact in the Tackle during Rugby Union Matches. In this research, they tried to put numbers to the head of steam that players build up as they storm into a tackle. (Rugby Union, by the way, is the rugby we’re most familiar with here, the one with plenty of rucks and scrums; as compared to Rugby League, the ruck-free game played mostly in England, Australia and New Zealand.) They followed up that research with a study on Momentum and Kinetic Energy before the Tackle in Rugby Union, published in the Journal of Sports Science and Medicine (JSSM) early this year.

Over these two studies they looked at the two most commly occuring types of tackles in rugby: the front-on and the side-on. Then, leaning on the fundamental physics of collisions, they compared the momentum between ball-carrier and tackler; described the relationship between the mass of the ball-carrier and the mass of the tackler; measured the velocity and momentum of these players; and calculated the dispersion of energy during a tackle.

For the research, they employed video analysis in combination with a computer-generated algorithm on footage from Super 14, Varsity Cup and under-19 Currie Cup games.

In general, other studies have shown, loose forwards engaged in the most tackles over a match (25-35), followed by inside backs (20-25), tight forwards (10-25) and outside backs (10-15). It’s been found that, more often than not, ball-carriers – most likely to be a forward, as per the dictums of the modern games – were generally heavier than the tacklers. That forwards had a significantly higher momentum when carrying the ball than backs do. That – despite the fact that ball-carriers were likely to be heavier and had a momentum advantage – tacklers dominated tackles by 57% to 43%.

This data now underpins a new model Hendricks and Lambert describe in a new paper, Theoretical Model Describing the Relationship between the Number of Tackles in which a Player Engages, Tackle Risk Injury and Tackle Performance.

The ultimate aim of the model is to see how the number of tackles a player makes and takes correlates with the risk of injury and performance. In this way, they hope to see why some players are better at getting up from a tackle.

“They must be doing something right,” says Hendricks.

After all, theory and experience dictates that a player has an “upper limit” of the amount of tackles they can take or make. “This upper limit,” the researchers write, “is reached either through one or more very high-energy impact contact situations or, accumulates over a match or season following repetitive low-energy impact situations.”

But, as others have argued, that upper limit of tackle endurance can be offset by “effective tackle skills training, proper physical conditioning, strength, power, equipment and attitude/motivation”. So, for example, it’s been shown that those with better lower-body muscular power (measured with vertical jumps) and acceleration (sprints), or upper body muscular strength (pull-up strength is a good indicator) either tackle better or have a reduced risk of injury. (Although, to everyone’s surprise, the numbers suggest that those players who can run a 40m sprint in or under 5.25 seconds were more likely to be injured in contact events like tackles.)

If their model is theoretical for now, the UCT ESSM two have plans to make it more empirical. So, for example, they’ve started off with tracking players’ performance at Craven Week, aiming to monitor the tackle-injury events of injured players, and then compare those to their non-injury events over the tournement.

“That way we can see that player A makes 19 tackles without getting injured, but then gets injured in the 20th because of some deficiency in technique, like dropping the head,” says Hendricks.

These findings, the researchers hope, could eventually makes its way into the design and development of new training drills and equipment, and the management of training and recovery between training sessions and matches.

“The tackle is the essence of rugby,” says Hendricks, “a physical battle between opposing athletes. We want to make sure that all players engaging in tackle contact are 110% equipped to do so, from both a performance and injury prevention point of view.”

All the better for both fans and players.