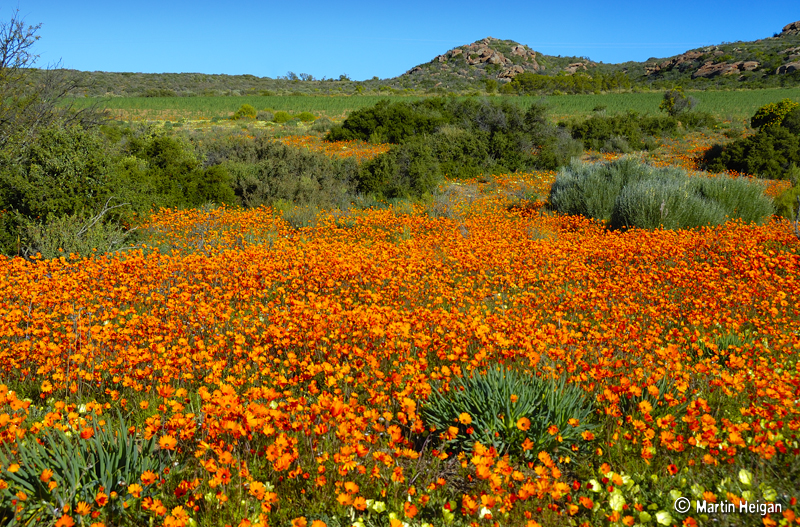 For the next few weeks, Scibraai will be featuring a few articles that appeared in the 2015 New Voices in Science publication. The articles are all written by postgraduate students of Stellenbosch University, and tell the stories of what they found out during the course of their research. First up is Caroli de Waal, who found proof that Darwinian Demons don’t exist in Namaqualand…

Let’s try a thought experiment. Suppose you go out for dinner at a fancy restaurant, but doing so would mean you’d have to walk to work tomorrow, because you don’t have money left to buy petrol for your car. This is an example of a trade-off, a term familiar enough in economics. But in the natural world, plants have to make similar trade-offs. All living organisms have a limited amount of resources to get by on, so organisms have to “choose” how they spend those resources.

An evolutionary trade-off is the reason why the ideal organism, the so-called “Darwinian demon” doesn’t exist: an organism that can do all things well, will live indefinitely and outcompete all others. Namaqualand daisies make similar trade-offs when it comes to dispersing their seeds, something that was believed in theory, but has now been proven using laboratory experiments with actual seeds.

Species that can disperse their seeds over a large area don’t have the ability to stay dormant, a strategy which would allow them to spread their seeds over time. This is the finding of Caroli de Waal and colleagues from the Department of Botany and Zoology, following three years of studying daisies in the semi-desert Namaqualand region of South Africa.

Namaqualand daisies germinate and flower in time for spring, following the relatively reliable winter rains. But rainfall patterns change over time as a consequence of climate change and the area is prone to local disturbances such as farming and overgrazing. Therefore, these daisies have adapted to this risky environment using two distinct strategies: some stagger seed germination over many seasons (dormancy), while others spread their seed over a wide distance (dispersal).

The hypothetical “Darwinian demon” would be both a spreader and a sleeper. But scientists know that evolutionary theory says this isn’t possible. However, few field biologists have tested this idea using living plants. And those who had tried it came back with contradictory findings.

To clear this up, De Waal and her team took 27 different daisy species into a lab and put them to work. First, they measured the plants’ ability to spread their seed: they dropped seeds down a vertical Perspex tube and counted how long it took them to reach the ground. The longer it takes to fall down the tube, the better the seed’s ability to catch the wind, meaning it would spread well. Then, the researchers incubated seeds from different populations in a growth chamber, keeping temperature, light and moisture all constant. They counted the number of seeds that germinated over a period of 30 days of constant watering.

Viable seeds that didn’t germinate were regarded as dormant. The researchers then tested to see if there was a relationship between these two traits, while also taking into consideration whether species were closely related or not.

Their results show that the daisies’ seeds which spread well generally aren’t dormant in the soil. And those that are dormant, don’t spread well. This shows that the theory was right: these daisies make an evolutionary trade-off between spreading their seed, and being dormant.

Biologists still don’t fully understand the mechanisms that drive this trade-off, though. It may be that the resources used by a plant to create dispersal structures, such as wings or plumes, aren’t available to make thick seed coats to allow a seed to be dormant. Namaqualand daisies may have to “choose” only one risk-reducing strategy at the cost of the other.

Evolutionary biologists are keenly concerned with understanding the evolution of dispersal and dormancy, because it may help them understand how plants will cope with the threat of global climate change. Climate change is expected to make important ecological factors less predictable. Rainfall, for instance, is expected to become much more sporadic in Namaqualand, meaning the daisies will experience more frequent “bad” years, so species that don’t produce many dormant seeds may face a higher risk of extinction, because they can’t escape these years of erratic rainfall.

Dispersing well may not be a good enough risk-reducing strategy in the future, because seeds can’t disperse far enough to escape the region entirely. Just like we have to forgo that new pair of shoes in order to pay the monthly bills, this study shows that Namaqualand daisies trade one survival strategy off against another. It looks as though plant species’ responses to tough environments are even more complex than previously thought.

Big picture stuff for paleobiologist: the history of life on Earth in 96 pages