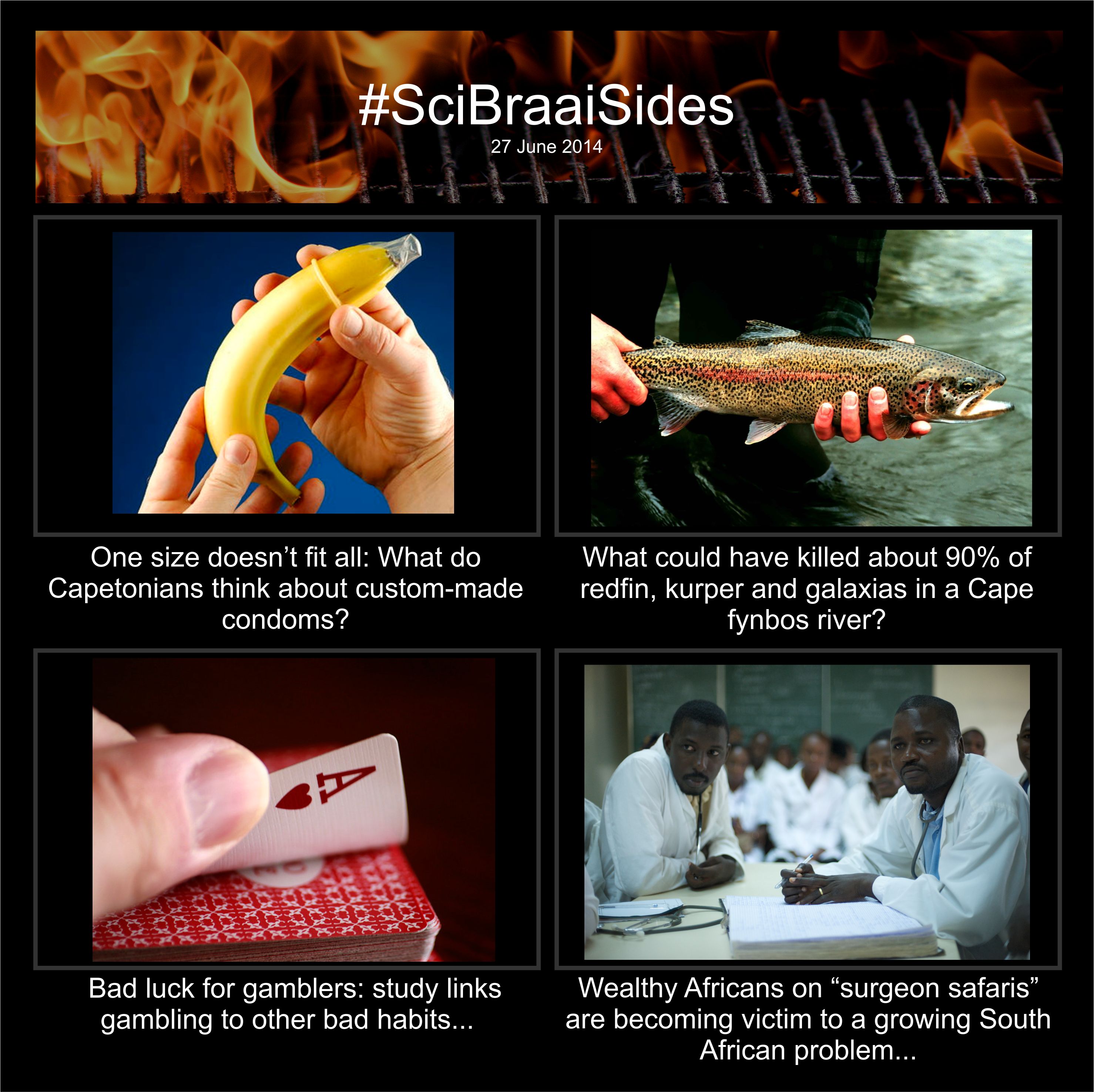 Trout terrorists, custom-fitted condoms, problem gambling and surgeon safaris to South Africa are among the topics discussed in this week’s SciBraai Sides. A study among Cape Town men and a few of the city’s sex workers have shed interesting light on condom use, and people’s preferences.

It was conducted by graduate students from Emory University in the US among 133 heterosexual men and 20 sex workers in Cape Town. The study was done in collaboration with South Africa’s Human Sciences Research Council (HSRC) and other community-based and government agencies in Cape Town. They wanted to find out what the demand is for custom-fitted male non-standard condoms, if it would be feasible to incorporate these into current sexual health interventions, and what the general feelings were about the standard condoms.

Of the heterosexual men surveyed, nearly one-third (32%) had not used a condom when last they had had sex. Two-thirds (67%) experienced condom fit problems including breakage or slippage, and 72% reported they would be more likely to use male condoms if they were custom-fitted.

The men interviewed were keen to have a greater condom size variety available, and had a preference for having a small number of different sizes, a well-organized supply chain, affordable pricing, and long-term supply availability.

Most sex workers interviewed indicated that they had experienced condom failure during intercourse with clients, and the majority believed that the availability of more condom sizes (such as small, medium and large) would improve clients’ willingness to use condoms. They however added that size alone would not encourage condom use among their clients, who rather preferred condoms that are coloured, flavoured, and textured. They also said that government-branded condoms were a big no-no among clients.

“All of the different populations studied showed substantial interest in an expanded array of condom sizes,” writes Helen Baker of Emory University in the US.

No, it’s not just people from Europe or the USA who tell their friends that they will be on safari in South Africa, but actually then visit the country for plastic surgery and other medical treatment. Actually, there’s more high-end medical tourists from especially Southern Africa who use our country as a “surgeon and safari” destination than we think. And their visits are quite financially lucrative for the medical profession, too.

“The general lack of access to medical diagnosis and treatment in SADC countries has led to a growing temporary movement of people across borders to seek help at South African institutions in border towns and in the major cities,” says Jonathan Crush in an article published in the journal Social Science and Medicine.

Crush, along with co-author Abel Chikanda, are associated with the Balsillie School of International Affairs in Canada. Crush is also an honorary professor in geography at the University of Cape Town.

“The majority of the movement is motivated by lack of access to basic healthcare at home,” adds Crush.

The high demand and large informal flow of patients from countries neighbouring South Africa has prompted the South African government to try and formalise arrangements for medical travel to its public hospitals and clinics through inter-country agreements. This is being done to recover the cost of treating non-residents.

“The danger, for ‘medically-disenfranchised’ medical tourists who fall outside these agreements, is that medical xenophobia in South Africa may lead to increasing exclusion and denial of treatment,” adds Chikanda.

Reference: Crush, J. & Chikanda, A. (2014). South-South Medical Tourism and the Quest for Health in Southern Africa, Social Science and Medicine

The stats prove it: rainbow trout is the enemy of the Cape Floristic Region’s endemic river fish species.

The density of native Breede River redfin, Cape kurper and Cape galaxias are 89–97 % lower in invaded streams than in streams without trout. In most of the invaded streams, no native fish of more than 4cm in size can be found.

This is some of the findings of a study done by University of Cape Town researchers Jeremy Shelton and Jenny Day, along with Stellenbosch University’s Michael Samways. It is published in the journal Biological Invasions.

The researchers evaluate the impact of the introduced trout on the native fish populations in 24 minimally disturbed streams of the upper Breede River catchment. Half of these streams are invaded by trout. They found that native fish species were present at all 12 sites without trout, but only in five of the dozen invaded sites.

“Taken together, these findings constitute evidence that trout have depleted the abundance of Cape Floristic Region-endemic fishes through size-selective predation,” says Shelton. “It is recommended that managers aim to prevent new trout introductions and consider eradicating trout populations where they pose a threat to highly threatened native species.”

More to problem gambling than meets the eye

People who have difficulty with problem gambling often also suffer from depression and anxiety, and use alcohol use and other substances more.

This is the finding of Carla Sharp of the University of Houston, lead author of an article in the Journal of Gambling Studies that provides the first evidence of comorbidity of problem gambling and other psychiatric problems among a sample of South African gamblers. Economists of the University of Cape Town were also part of the research team.

The team gathered the information from the 2010 South African National Urban Prevalence Study of Gambling Behavior, which includes information of 3000 people.

“The prevalence of depression, anxiety, alcohol and substance use were clearly higher among the sample at risk for problem gambling,” says Sharpe. “Black African racial status and living in areas characterized by migrant mining workers was associated with increased risk of problem gambling and comorbidities.”

Can we rid the world of mosquitoes? Should we?