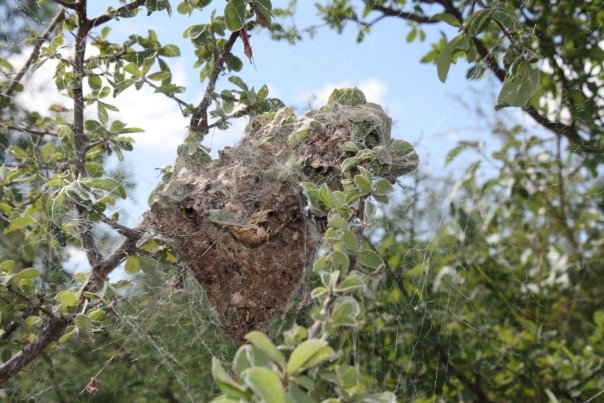 Are you going to the Kalahari Desert or Northern Cape during the coming holidays? Then look out for the colonies of Stegodyphus dumicola social spiders –  you might call them the sociable weavers of the spider world. Each spider colonies can be thousands strong – up to 2 000 members in fact. Not the type of thing that most people suffering from arachnophobia would like to consider!

You will find these colonies in thorn trees in the arid parts of southwestern Africa. Their living quarters are quite something. They build large webs consisting of dense communal living areas and a two-dimensional capture web.

On first glance, all the spiders in one colony might all look alike and seem to be busy with the same tasks. A study led by Carl Keiser of the University of Pittsburgh in the US has shown the contrary, however. The American researchers transported various colonies collected in the southern Kalahari Desert to their laboratory at the University of Pittsburgh. They then carefully watched to see what extent individuals were involved in tasks such as attacks, web building or web repairing. The findings were published in Springer’s journal Behavioral Ecology and Sociobiology.

They found that the size and condition of a particular spider’s body indicates which task it generally performs within a colony. In addition, neighbouring colonies can have different “personalities” too.

Keiser and his colleagues believe that such studies are vital to understand how the traits and actions of individuals combine to form and develop the social organization and collective behaviour of a particular species. In the case of Stegodyphus dumicola, the research group found that body size and body condition influence the chances that an individual spider will perform any of a range of tasks needed to maintain the colony. Spiders with smaller bodies are more likely to help with web building and maintenance. Those who are in better shape tend not to capture prey, while those with lower body condition are more likely to be busy with foraging.

A colony’s “personality” or collective behaviour is best predicted by the variety of individual spiders living within it. Colonies with members with different body sizes or aggression levels contain spiders which are slower to emerge from their nest to attack prey. Variation in boldness within colonies is in turn linked with better chances that more individual spiders will take part in standard web building activities.

“The results are intriguing because this trait variation and its resulting task differentiation gives rise to a cooperative breeding society composed of highly related, inbred individuals of nearly identical age which develop together in synchrony,” explains Keiser. “Our findings differ from the once conventional reasoning among social spider researchers that social spider societies are homogenous and egalitarian.”

Note: This article is based on a press release prepared for Springer SBM.