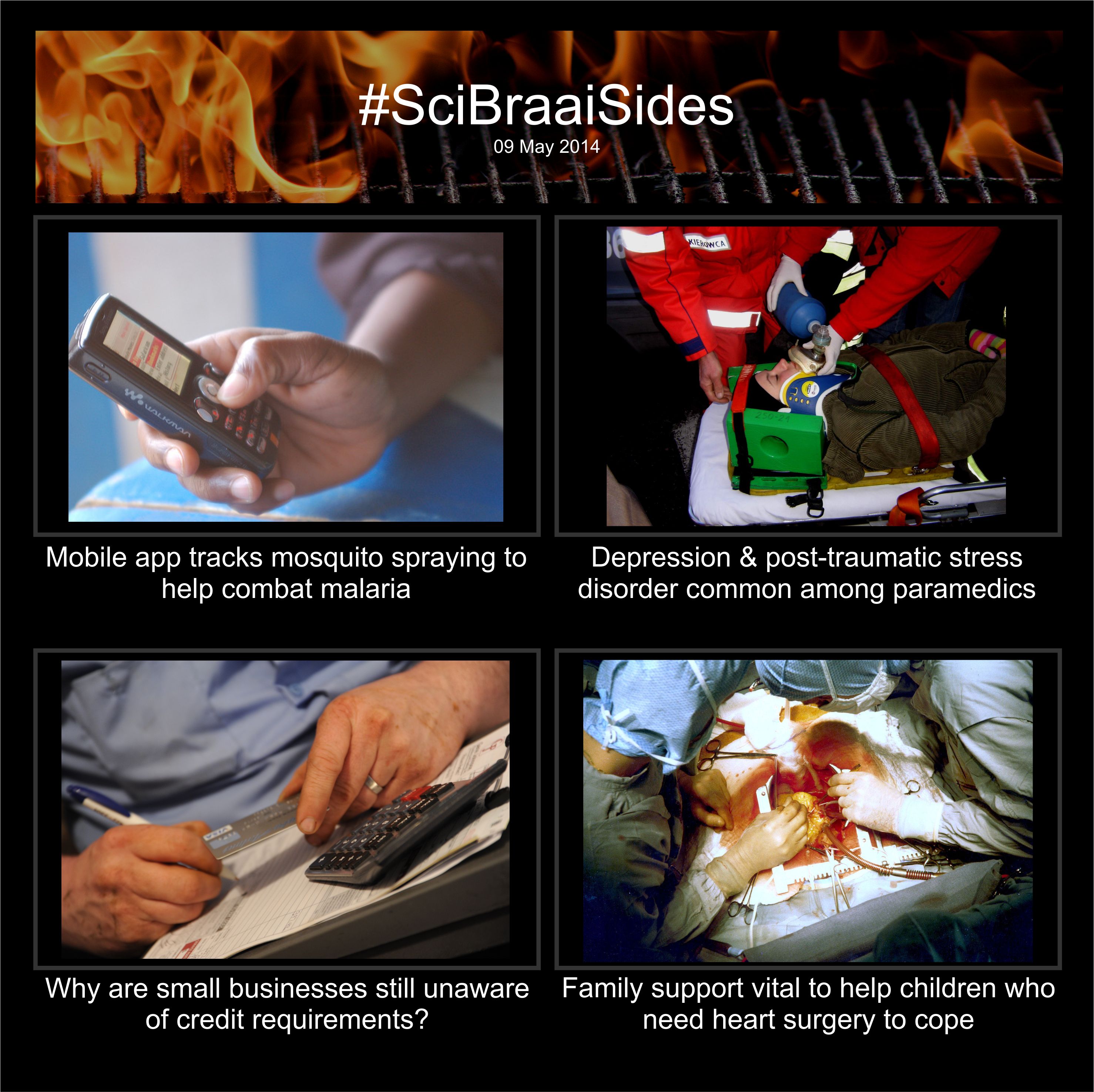 Want to know more about an app that’s helping with the extermination of malaria-carrying mosquitoes, the credit state of SMMEs, heart surgery among children in South Africa or the stresses of a paramedic? Then have a read through this week’s Scibraai Sides, which takes a look at recent South African research studies. Have you heard of mSpray yet? It’s a mobile app that could help with malaria elimination programmes. It tracks indoor residual spraying campaigns in areas where malaria-carrying mosquitoes are found. Launched in 2012, it keeps accurate account of the GPS coordinates of insecticide sprays, the quantity of DDT and pyrethroid sprays, and the refilling of spray cans.

In a new article in Environment International, Brenda Eskenazi of the Center for Environmental Research and Children’s Health at the University of California writes about mSpray. Among her co-authors are researchers from the Malaria Control Programme of the National and Limpopo Departments of Health.

Recent estimates indicate that malaria has led to over half a million deaths worldwide, mostly to African children. Indoor residual spraying (IRS) of insecticides is one of the primary vector control interventions. However, current reporting systems do not obtain precise location of IRS events in relation to malaria cases, which poses challenges for effective and efficient malaria control. This information is also critical to avoid unnecessary human exposure to IRS insecticides.

The use, acceptability and feasibility of the app was tested in Limpopo. “The low-cost, cell phone-based “mSpray” app was learned quickly by users, well accepted and preferred to the current paper-based method,” writes Eskenazi.

Thanks to the pilot programme, various areas of improvement were identified. This includes increased battery life for the cell phones used. A number of logistic and user problems (e.g., cost of cell phones and cellular bundles, battery life, obtaining accurate GPS measures, user errors, etc.) were also noted, which would need to be overcome before the app can be fully deployed.

“Use of cell phone technology could increase the efficiency of IRS malaria control efforts by mapping spray events in relation to malaria cases,” says Eskenazi. “This could result in more judicious use of chemicals that are potentially harmful to humans and the environment.”

Being a paramedic is probably one of the most stressful occupations there is. Just image everything that a paramedic sees in one day – all manners of injury and death.

Therefore it is no wonder that emergency healthcare workers, including trainees and individuals in related occupations, are at heightened risk of developing posttraumatic stress disorder (PTSD) and depression owing to work-related stressors.

To assess this, researchers of Stellenbosch University’s Department of Psychiatry set about investigating the type, frequency, and severity of direct trauma exposure, posttraumatic stress symptoms and other psychopathology amongst 131 paramedic trainees. Their aim was to create a risk profile for individuals who are at higher occupational risk of developing PTSD.

They found that 94% of paramedic trainees had directly experienced trauma, with 16% meeting PTSD criteria. A high rate of depression (28%), alcohol abuse (23%) and chronic perceived stress (7%) and low levels of social support was also found.

“There is a need for efficient, ongoing screening of depressive and PTSD symptomatology in trauma exposed high risk groups so that early psychological supportive interventions can be offered,” says Celine Fjeldheim, author of a study published in BMC Emergency Medicine. “Paramedic trainees have high rates of PTSD and those who meet PTSD criteria have higher rates of perceived stress and depression, lower rates of social support and resilience, and poorer physical health, which can be detrimental to overall health.”

Making it easier for SMMEs to get credit

Lack of collateral is the most important reason why credit from commercial banks is not available to new South African small and medium and micro-enterprises (SMMEs). However, training and communication on the requirements of banks and trade creditors can help to make new SMME owners to get investment ready and to improve the availability of debt. Commercial banks can create awareness of their funding requirements especially the importance of collateral through advertisements and communication with microenterprises.

These are among the recommendations of a study into new micro-enterprises by University of Limpopo business management researcher Olawale Fatoki, in the Journal of Economics. Fatoki specifically looked into the reasons why SMMEs struggle to access external finance. A survey was done in the Johannesburg Central Business District, and 46 questionnaires were completed, generally by people who are the sole proprietors of their business.

Coping with heart surgery among children

The support of extended family, psychological and emotional support, trust and spirituality: these vital elements help children who go through heart surgery to cope. And their families do too.

This is the finding of a study undertaken at Red Cross War Memorial Children’s Hospital in Cape Town, and involved researchers from the University of Cape Town, the University of Sydney, and the hospital itself. It was presented at the 7th World Congress on Paediatric Critical Care in Turkey.

Little is known about South African children who have cardiac surgery; their socio-cultural backgrounds, pathway to care and how their families perceive the condition and cope. Therefore the researchers investigated the pathway of care of ten children who were scheduled for this type of surgery. They looked into the family’s coping strategies, support mechanisms, beliefs and cultural understandings around cardiac surgery.

“Heart disease was initially described by parents as having no special cultural meaning and many said that their religious background had no influence on their beliefs around heart surgery,” writes Lauraine Vivian of the Primary Health Care Directorate at the University of Cape Town. “Yet during surgery and recovery parents reported feeling high levels of anxiety and uncertainty. At this time they found comfort in extended family/friends and spirituality became protective in maintaining hope and faith in a successful outcome.

Parents generally emphasised a significant degree of trust in the doctors, nurses, and healthcare system.

The splash of dignity