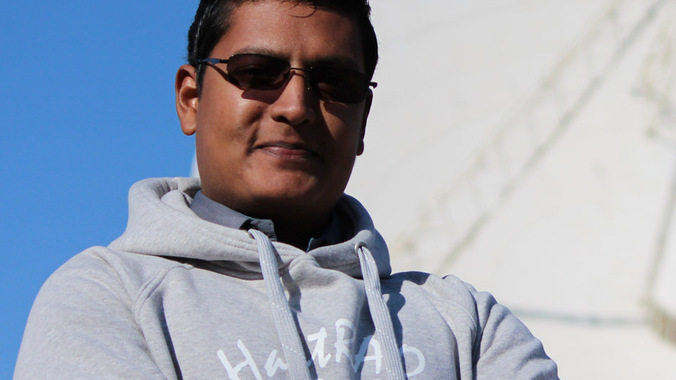 In the dark and cold chasm of space, huge jets of charged particles erupt around a super-massive black hole, writes Arvind Ramessur, a MSc candidate at the University of South Africa (UNISA).

Black holes, whose gravitational pull is so strong that not even light can escape, are usually found in the hearts of galaxies, known as active galactic nuclei (AGNs). These AGNs feed on gas, dust and stars swirling around them and shoot out jets from their polar regions at close to the speed of light.

Unlike man-made jets (water from a hosepipe, for example) or natural jets (think volcanic eruptions), astrophysical jets rarely have a solid nozzle and rigid walls to direct the charged particles that they expel. Some of these particles are so energised that, instead of spiralling inwards towards the black hole, they shoot away in the jet and escape. These celestial jets allow us to investigate the laws of physics in extreme environments that cannot be simulated on Earth, and possibly find areas where they do not hold.

In radio astronomy, such small AGN-jets are usually observed with a technique known as very long baseline interferometry (VLBI), which uses a number of radio telescopes, often continents apart, to look at the same object. The data from the different antennas are combined to create a far higher resolution than any single instrument could achieve. This technique has allowed radio astronomers to observe celestial objects and phenomena in unprecedented detail.

The 26m VLBI dish at Hartbeesthoek Radio Astronomy Observatory (HartRAO) in Gauteng, a facility of the National Research Foundation, was the continent’s only radio telescope until the construction of South Africa’s prototypes for its Square Kilometre Array (SKA) bid. Used primarily as a science instrument, HartRAO is also helping to boost skills development across the continent and prepare for the SKA. This radio observatory has also participated in global networks such as the European-VLBI (EVN) and will also be pivotal in the African-VLBI (AVN), a collection of radio telescope spread across the continent.

A team of astronomers from Canada, the United States and HartRAO used VLBI to study the nucleus of the spiral galaxy Messier 81 (also known as M81 or NGC 3031). Situated about 12-million light years from earth in the constellation Ursa Major, the spiral galaxy M81 is similar to our own Milky Way Galaxy. With its elegant and symmetrical spiral arms and disc of stars, M81 is the closest spiral galaxy to host a low power AGN. Not every galaxy harbours an active black hole; our own galaxy, the Milky Way, is an inactive galaxy, though it shows signs of past activity.

The result was striking: the researchers imaged the central region of M81 and found an AGN-jet, whose length was about 4000 times the distance between our Sun and Earth, protruding from the nucleus. This observation showed that the core of M81 is indeed an AGN, and ruled out the alternate possibilities of a starburst or supernova. They found that the jet is not straight, but has a noticeable bend, like hedgehog spines. It also changes direction in its orientation over time just like a spinning top slowing down. The nucleus of M81 is more powerful than that of our own galaxy, but much weaker than young galaxies such as quasars even further away.

At present, technology can only aid us to see so much.