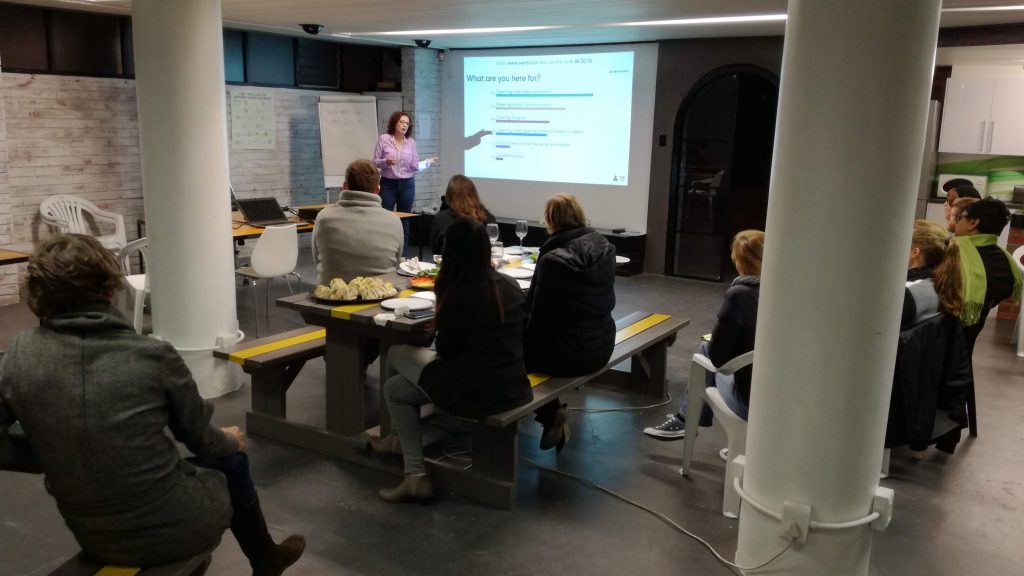 We began by taking part in a nifty online survey with real-time results, to find out what everyone’s expectations of the evening were. The majority of people were there either to find out more about science communication methods, or to share the science communication work they were already doing. Only a few admitted to having turned up for the free snacks! Participants included students, professional researchers and NGO staff, and curiously, many were from a marine science background.

Alaina spoke about her path from studying mathematics via teaching a graduate course on entrepreneurship for scientists, to providing career advice for the global science and education communities. She highlighted the importance of storytelling – using a narrative with a clear beginning, middle and end – to engage audiences and communicate messages effectively. She also uses comedy to engage her audiences and encouraged us to add humour to presentations, as a way to reinforce key messages.

For the rest of the evening, participants took turns speaking about the science communication work they were doing, or the goals they have for communicating with specific audiences. Jacinta Delhaize, an astronomy postdoctoral researcher at UCT, spoke about organising an innovative event bringing scientists and government together in Croatia, to foster better communication between the two groups and to encourage the development of science-based policies. She said that by encouraging interest in and appreciation of astronomy, science communicators can promote critical thinking among the public – a principle which of course extends to many other fields of science.

Another theme for the evening was how to measure the impact of our communication and engagement activities. Pavs Pillay from WWF spoke about their SASSI’s sustainable seafood programme, and the tools they have developed to enable consumers to make responsible seafood choices. WWF now faces the challenge of measuring the impacts these tools have had. Future funding for such programmes often relies on being able to demonstrate that measurable progress has already been made, but assessing impact is not always straightforward. This discussion was a useful reminder that developing one-way communication strategies is not enough – we need to factor in feedback and assessments, to give us insight into whether our communication methods are effective, and how we might improve them.

There was lively discussion in the room, lots of suggestions for ways forward, and generally a supportive and encouraging environment. Both Paul Kennedy, from ScienceLink, and Alaina had advice for various ways in which individuals could broaden the reach of their communication success stories. It seems we don’t always give ourselves enough credit for our successes or think about how we could share those achievements, to help broaden our collective understanding of effective science communication and open our minds to new and creative approaches. I look forward to more events like this, where scientists and practitioners from a range of fields can come together to share their approaches to science communication, and help each other with the challenges they face. After all, science is not finished until it is communicated!

ScienceLink thanks the OpenUp team for generously sharing their space to facilitate this event.