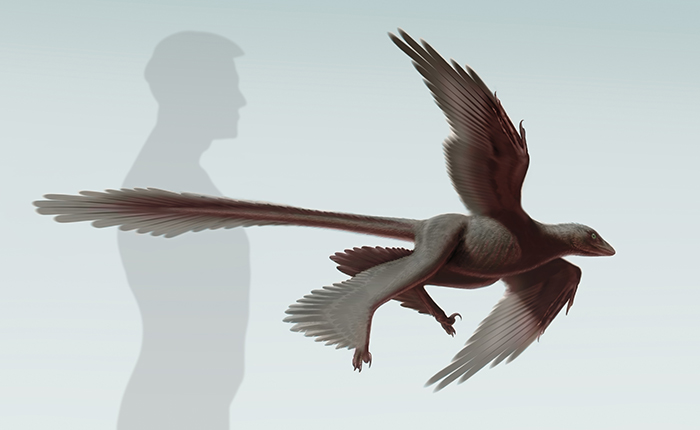 An international team of experts, including Professor Anusuya Chinsamy-Turan from the University of Cape Town, has discovered a small, feathered dinosaur with four wings and a long tail. Discovered in the Liaoning province in China, the 125-million-year-old microraptor sheds light on how dinosaurs flew, long before birds as we know them existed.

Enter the changyuraptor which, at 4kg, is the largest of all known four-winged dinosaurs. It also had a full set of feathers covering its body, and long tail feathers. The team, led by Dr Luis Chiappe from the Natural History Museum Los Angeles in the United States, had its findings published on Tuesday in s

“The new fossil documents that dinosaur flight was not limited to very small animals but to dinosaurs of more substantial size,” Chiappe said. “Clearly far more evidence is needed to understand the nuances of dinosaur flight.”

Dr Alan Turner, from Stony Brook University in New York, said: “Numerous features that we have long associated with birds in fact evolved in dinosaurs long before the first birds arrived on the scene. This includes things such as hollow bones, nesting behaviour, feathers and possibly flight.” But the question of how dinosaurs would have flown remains unanswered.

“As we know, birds have wings on their forelimbs. However, about 10 years ago predatory dinosaurs were discovered with wings on both their forelimbs, and hindlimbs,” said Chinsamy-Turan.

The different faces of protests in South Africa