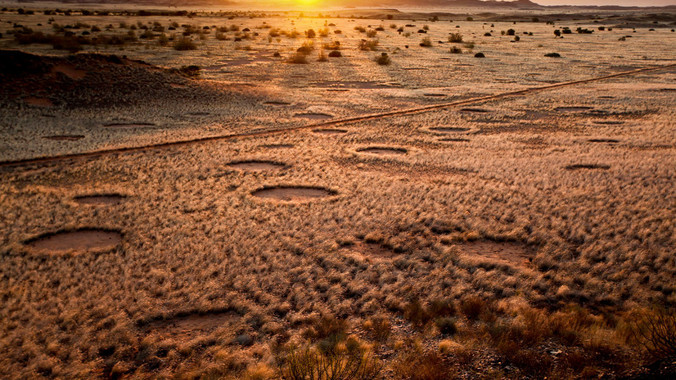 Plants refuse to grow in Namibia’s fairy circles, and scientists are on a mission to find out why. No theory has been proven yet.

Armed with a GPS, two gardening trowels, a notepad, various sensors and – I kid you not – tea strainers, a group of scientists is wandering the plains, searching for patches of death.

On the hyper-arid plains of the Namib desert, stunted grass crunches underfoot. It has been a dry season, and while in some years the grass tinges the landscape a bleached green, this year the tussocks are shrivelled and close to the ground. But in certain areas sandy, circular patches of soil stare back at the sun.

The Himba people of Namibia believe these nearly lifeless circles are the footprints of their god, Mukuru. Professor Don Cowan, director of the Genomics Research Institute and the Centre for Microbial Ecology and Genomics at the University of Pretoria, says that he likes the UFO theory best, which says these mysterious patches in the desert where nothing will grow are the African equivalent of crop circles.

He is joking, but the fact remains that there is still no definitive explanation for this phenomenon.

Fairy circles, which exist for up to 80 years, are different from the fairy rings of Europe, known as ronds de sorcière(sorcerers’ rings) in France and hexenringe (witches’ rings) in Germany. Whereas fairy circles are barren sites, fairy rings are a brighter green than the surrounding grass and are often circumscribed by a ring of mushrooms. According to European folklore, stepping into fairy rings could result in bewitchment, maiming or death.

Here in the Namib, which stretches from northern South Africa through Namibia up into Angola, fairy circles are easy to recognise. The patches of sandy soil are between one and 12m across with nothing growing in the centre; on the edge there is a flush of grass that stands higher than the rest of the surrounding grass, a crown framing this bald pate.

Since they were first reported in 1971, no one has presented a definitive theory on how these circles are formed. “There is a series of interesting hypotheses,” says Cowan, such as radioactivity, ants, termites and gas leaks below the surface. “The chemists think it is gas … the zoologists think it is ants or termites. None of these is definitively proven.”

Herbicide
His group is testing, among others, the hypothesis that it is a fungus. If it is a pathogenic fungus, it could be used as an herbicide, mimicking the phenomenon of fairy circles to keep weeds out of your paving.

But, to the scientists, this mystery sits under the skin like an itch: Why is the grass in these areas dying so uniformly? All the scientists who researched fairy circles in the past 40 years have missed something. But what?

Norbert Juergens, a biologist from the University of Hamburg, published research in the journal Science last year claiming that these circles were caused by a sand termite. He looked at what organisms manage to live in fairy circles, and found that only the sand termite Psammotermes allocerus was present in most of the hundreds of fairy circles sampled.

Interestingly, although from the outside these appear to be circles of death, they are actually reservoirs of the most important resource in the desert: water. Juergens looked at the water concentration at different depths in fairy circles.

“The removal of all water-transpiring plants [by the sand termites, which eat them] allows the accumulation of water underneath the fairy circle after rain events,” he writes in his paper, The Biological Underpinnings of Namib Desert Fairy Circles.

But as Walter Tschinkel, a biologist at Florida State University, asks: Are the termites a cause or a consequence of fairy circles? Do they congregate underground where there are already no roots and relatively a lot of water, or are they the cause? Many people are not satisfied with the termite explanation.

Dr Willem Jankowitz, a lecturer at the Polytechnic of Namibia, published a paper in 2008 in the South African Journal of Botany hypothesising that gas emissions played a role in fairy circles. His team performed an in situ experiment in the NamibRand Nature Reserve, in which they planted grass from the plains in containers filled with soil from the circle and from outside, covering the bottoms of some containers.

The plants in open-bottomed containers placed inside fairy circles died, which pointed to possible gas emissions under the circles.

Hi-tech hairbands
Hovering over a fairy circle under the baking sun, it seems impossible that there is an oasis of water underneath our feet. University of Pretoria research fellow Dr Jean-Bapiste Ramond is digging a hole about 10cm deep in the centre of the circle to bury two sensors: an iButton sensor to measure the temperature and relative humidity every 10 minutes, and a tea strainer containing what looks like small hairbands made of fishing gut, with a piece of metal on it. Developed at the university, the hi-tech hairbands are “passive gas samplers”, Ramond says, which measure the gas levels underneath the fairy circles, and may help discover whether gas is indeed the reason for the lack of plants.

Another iButton is placed just under the surface, so that researchers can compare the temperatures and humidity underground and at the surface.

Postdoctoral fellow Dr Eoin Gunnigle is taking notes on the circle’s GPS co-ordinates and size, and looks into the distance for the next circle. “[After five days] when we take out the sensors, we’ll also take soil samples,” he says. These samples will be studied, inter alia, to find out “what [proteins are] being expressed by the organisms”, he says.

In a recent paper in the journal PlosONE, Dr Michael Cramer of the University of Cape Town’s department of biological sciences proposed that fairy circles are caused by grass resource competition in the arid-plain ecosystem, and that the organisation of the whole ecosystem causes these reservoirs of water underground and sandy soil on top.

But the University of Pretoria researchers are looking under a microscope for an explanation, rather than an overview of the ecosystem.