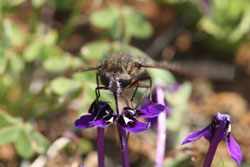 Have you ever watched long-tongued flies in action? To the untrained eye, it might seem as if those flies with an extra-long proboscis take extra-long to feed on a flower – almost as if they are struggling to suck nectar through their “straws”, as one does with a double-thick milkshake. However, the reverse is true, thanks to research done in Namaqualand.

A research team lead by Florian Karolyi of the University of Vienna in Austria, found that long-tongued flies with longer proboscis actually have an advantage over their counterparts with average sized nectar-sipping mouth parts. They can suck up almost all nectar available in a flower in one go, because they have more efficient suction pumps and strong muscles in their heads.

Dr Jonathan Colville of the South African National Biodiversity Institute’s Applied Biodiversity Research Unit in Cape Town is one of Dr. Karolyi’s co-authors on this paper, which was published in Springer’s journal Naturwissenschaft – The Science of Nature.

The extremely long, thin proboscis of insects from the genus Prosoeca (Nemestrinidae) evolved as an adaptation to feeding from long, tubular flowers. The fly inserts its proboscis into the flower and uses it like a straw to suck up nectar. A suction pump in its head creates a pressure gradient along the proboscis, which allows nectar uptake. The nectar with the highest sugar content offers the greatest energy reward. Biophysical reasoning, however, indicates that the exponential increase of viscosity that goes hand in hand with higher sugar concentrations would make it more difficult to transport sugar-rich liquids through a narrow food canal.

Because proboscis length differs visibly among long-tongued flies, Karolyi and his team therefore wondered if flies with longer tongues spent more time feeding on a flower because they had more trouble sucking up the nectar. This would mean that they expended more energy in the process of gathering nectar. To study this, the researchers focused on the parasitoid nemestrinid fly Prosoeca that feeds on a member of the Iridaceae family, Lapeirousia oreogena. The team captured the insect’s behaviour on camera, dissected its anatomy and measured the length of its body and proboscis.

They found the reverse to be true. A longer-tongued fly sports a more efficient two-part suction pump, while proboscis length and suction pump muscle volume go hand in hand. Its feeding time is reduced, because the fly is able to sip up more nectar in a single visit. This allows the insect to gain a possible advantage over other flies with proboscises of an average length. Analysis of the long-tongued fly’s anatomy suggests that the ancestors of Nemestrinidae might have been blood-sucking insects.