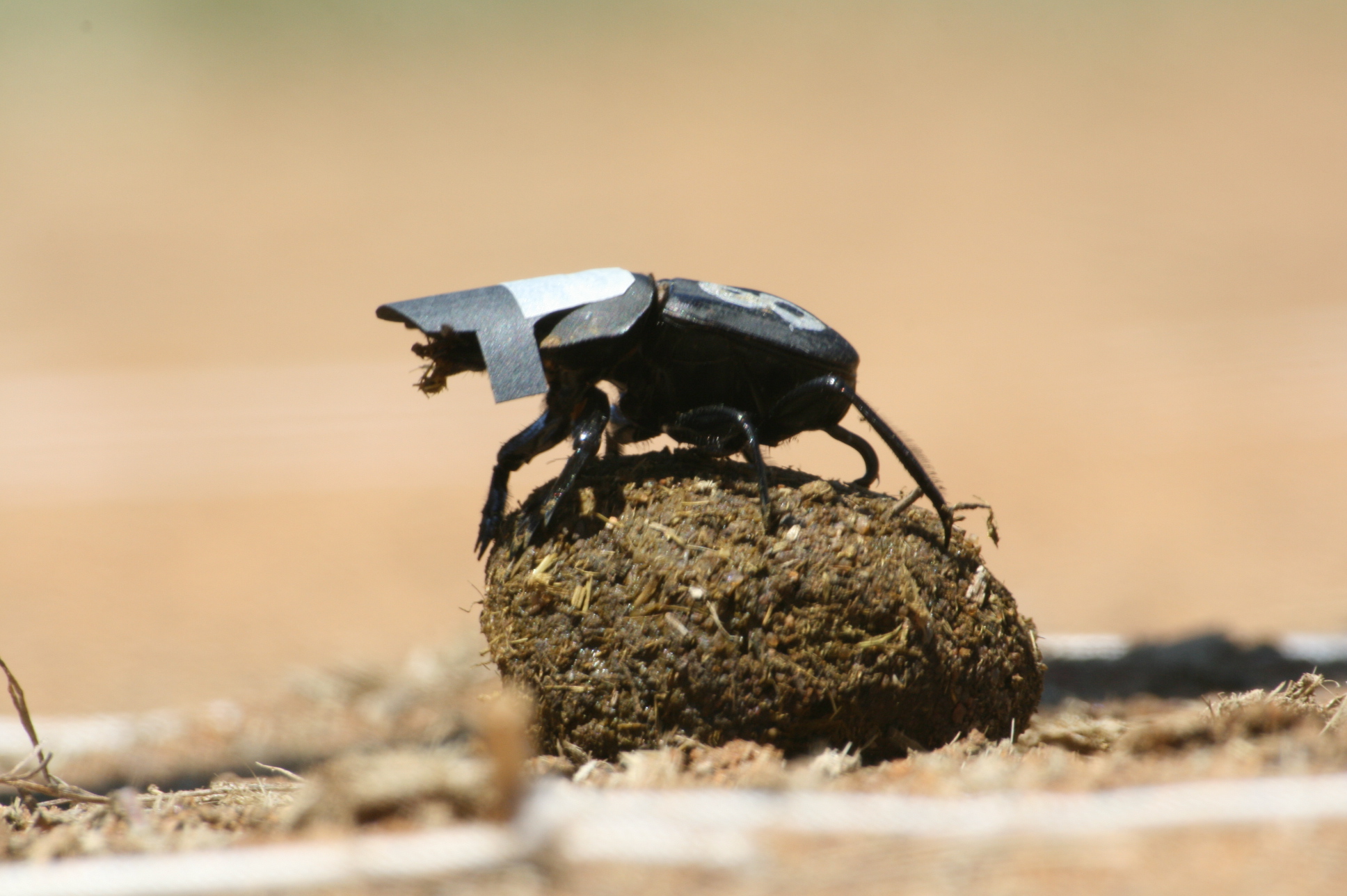 IN THE MIDDLE of the Kalahari, Scarab goes about his daily business, or rather, the business of some unsuspecting antelope.

As dung beetles of his species do, he collects pellets dropped by desert animals, while they’re still fresh, rolling them along to his nest in the sand.

The sun is climbing as the day ages, and the sand is heating up fast – up to 60°C. Scarab climbs onto his pellet every so often to find relief from the burning surface, and to look at the position of the sun relative to the dung pile and his nest. This is how he navigates, and each trip back to the pile becomes more direct, until he travels in nearly a straight line on every journey.

Suddenly, while collecting pellet number six, Scarab is whisked into the air along with the entire midden, and everything goes dark.

PROFESSOR MARCUS BYRNE and one of his colleagues are out for a run in the desert. As they often do during these field trips, they felt like some exercise, and a break from the camp atmosphere. Along the way they find a fresh heap of antelope dung and, yes, a Scarabaeus sp. dung beetle is working the pellets. Byrne carefully pockets the poo and the insect without harming either. They are perfect for his next experiment.

Back at the camp, Byrne puts the beetle and the dung, which is now in a petri dish, back on the sand.

SCARAB CAN SEE the sun again, and he’s on solid ground. He scurries over to his dung mound – it’s all still there, though it seems to be inside some kind of transparent artefact now. He darts away from the dung to dig a new nest nearby, and begins hauling the pellets home. On one of his return trips, the sun abruptly changes position, so Scarab changes his direction accordingly. After all, the sun points out the direction he must travel.

BYRNE AND HIS team of experimenters used a mirror to reflect the sun so that it would appear in a different position from the beetle’s perspective. In fact, this is how scientists figured out that some beetles orientate themselves using the sun rather than landmarks on the surface. They can also use other cues from above, such as the colour gradient of the sky, or even the Milky Way at night.

To further support this navigation hypothesis, the researchers fashioned a tiny beetle cap that would block out the view of the sky. As anticipated, while wearing the cap, the beetles became lost, no longer travelling in a straight line. The mirror and cap experiments were also performed on Kheper sp., beetles, which fly in and roll a ball out just once for every pile of poo they visit.

In other words, they fly in to a fresh dung source, make a ball, and roll it in a straight line to a location some way away. They only visit the dung once, and they roll it to a place they’ve never been and will never be again – this one-way trip is what gave scientists the clue that the beetles must rely on something other than surface landmarks to navigate, like the sun.

These Kheper species live in the north-east of South Africa. But scientists went further to support their sky-navigator theory by performing a displacement experiment on another type of beetle, Pachysoma sp., which abounds in the south-west and along the west coast.

Whereas Kheper walks backward, rolling a fresh dung ball to a never-before-visited spot, Pachysoma walks forward, dragging dry dung pellets one-by-one behind it to its nest.

For the displacement experiment, the researchers waited until the beetle returned to the dung pile to collect another pellet. They then displaced the dung beetle and the dung a few centimetres to one side so that the new position of the dung, the position it was moved from and the beetle’s nest created the three points of a triangle:

If the beetle used landmarks on the surface to navigate, it should realise that its surroundings have changed slightly, and it should readjust its course back to the nest accordingly.

What the scientists observed though, is that the dung beetle travelled in a straight line parallel to its original route, ending up at a point that turns the triangle into a rectangle:

This likely means it only knew which direction to go relative to the sun, not relative to a reference point on the ground.

Because the beetle still covered the right distance back to its nest, this experiment also shows that beetles use a method known as path integration, or dead reckoning: they combine the information gauged from the position of the sun with some other information, such as counting their steps.

The first sea-farers who ventured into the open seas, away from familiar coastline landmarks, also had to devise a clever path integration strategy to calculate the distance they’d travelled. Their solution was to throw a wooden log overboard, which was tied to a rope with knots at regular intervals. As they travelled further away from the log, they would keep unwinding the rope on the deck and trailing it overboard. They simply counted the knots to calculate their speed and estimate their distance, hence the nautical speed unit ‘knots’ still in use today.

How remarkable would these tiny desert critters be then, if they too could devise an odometer system to monitor their own movements?

To test this odometer theory, Byrne and company placed a barrier in the foraging path of the Kalahari Scarabaeus.

(Notice that Scarabaeus resides in the middle of South Africa, in between where Kheper and Pachysoma are found. “In this intermediate geographical location, we find intermediate behaviour,” says Byrne. He is referring the fact that Scarabaeus rolls fresh dung pellets backwards, and that they make nests – as mentioned above, Kheper rolls fresh dung balls backwards but makes no nest, while Pachysoma drags dry pellets behind it towards its nest. This hints at how dung rolling and navigation may have evolved between species in different parts of the country.)

When the Scarabaeus beetle encountered the barrier in its way, it simply went around and found its nest, so it indeed knew to compensate for the extra distance the barrier (and its changes in direction) had added to its route.

Next the team put a slippery ramp in the beetle’s way. Their aim was to see if the beetle would still compensate for the extra steps taken while slipping, even though the direction in which it would be moving now stays constant. Once the beetle traversed the obstacle, it stopped short of its nest. According to its built-in odometer, it had already taken enough steps to get home.

These and other clever experiments on Kheper, Pachysoma and Scarabaeus have certainly added weight to the idea that beetles combine path integration and cues from above to plot their course.

Watch Prof Marcus Byrne explain some of these experiments on this episode of The SciBraai Show:

Now to get back to our story….

But as any good scientists might wonder, does this mean Scarab definitely can’t use landmarks?

SCARAB finds himself amid a fresh heap of dung, his earlier disorientation long-forgotten. He had set about his business again, and is about to cart yet another pellet to a new hole in the sand. He gets his bearing from the sun and sets off in a straight line to his nest. But he finds nothing. Having counted his steps, he knows he is in the right place, but he scuttles a little further just to be sure.

He backtracks, drops his pellet where he’s sure the nest should have been, and sets out in another direction.

BYRNE’S COLLEAGUES HAD displaced the beetle and the dung by 50 m from where they first put him down, to see what would happen if the beetle found itself in completely novel surroundings, rather than just a few centimetres to one side. They now observe the creature dropping its pellet where it believed the nest to be, as before. But unlike before, it appears to be searching for its nest, returning to the dropped pellet every so often and venturing off again in another direction.

They wonder if the dung beetle is using the pellet as a search beacon, some kind of fixed point of reference. If so, this humble desert beetle would be the first insect known to use a tool – a search beacon made of poo.

This story was based on the Inaugural Lecture of Prof Marcus Byrne, held for the public at Wits University on 14 April 2015, titled ‘Science with Balls: The Evolution of Navigation in Dung Beetles’. Some of the rigorous scientific studies conducted by Byrne, his team and others, are presented here in a simplified way; this is by no means a comprehensive account of how the navigation system of beetles was uncovered. This article was not commissioned; it was written purely for the fun of writing.