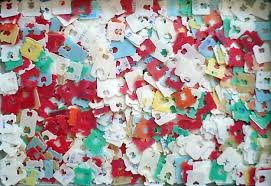 It seems that the simple bread tag has its disadvantages. For one, it’s a choking hazard.

In the latest edition of the South African Medical Journal, researchers and paediatricians associated with Stellenbosch University elaborate on three cases in which they had to remove this small piece of plastic from someone’s throat.

Don’t think at all that it’s a new thing, having a bread tag stuck in your throat. The first time bread tags having being swallowed was reported in medical literature was already in 1975.

“They appear harmless, and most parents and indeed most doctors are probably unaware that they are dangerous,” says lead author Dr Ryan Karro, a specialist in private practice who holds a sessional post in state practice. “We agree with those who call for complete elimination of bread tags and replacing them with safer options.”

The authors believe it might be the bright colours in which bread tags often come that make them so enticing for children to want to put into their mouths.

He advises that people remove the tags as soon as they are brought into a home, to be stored safely away from the hands of little children. Alternatively they can be donated to a worthy cause such as ‘bread tags for wheelchairs’, a local non-profit that uses the funds from the recycled plastic to buy wheelchairs for people who need it.