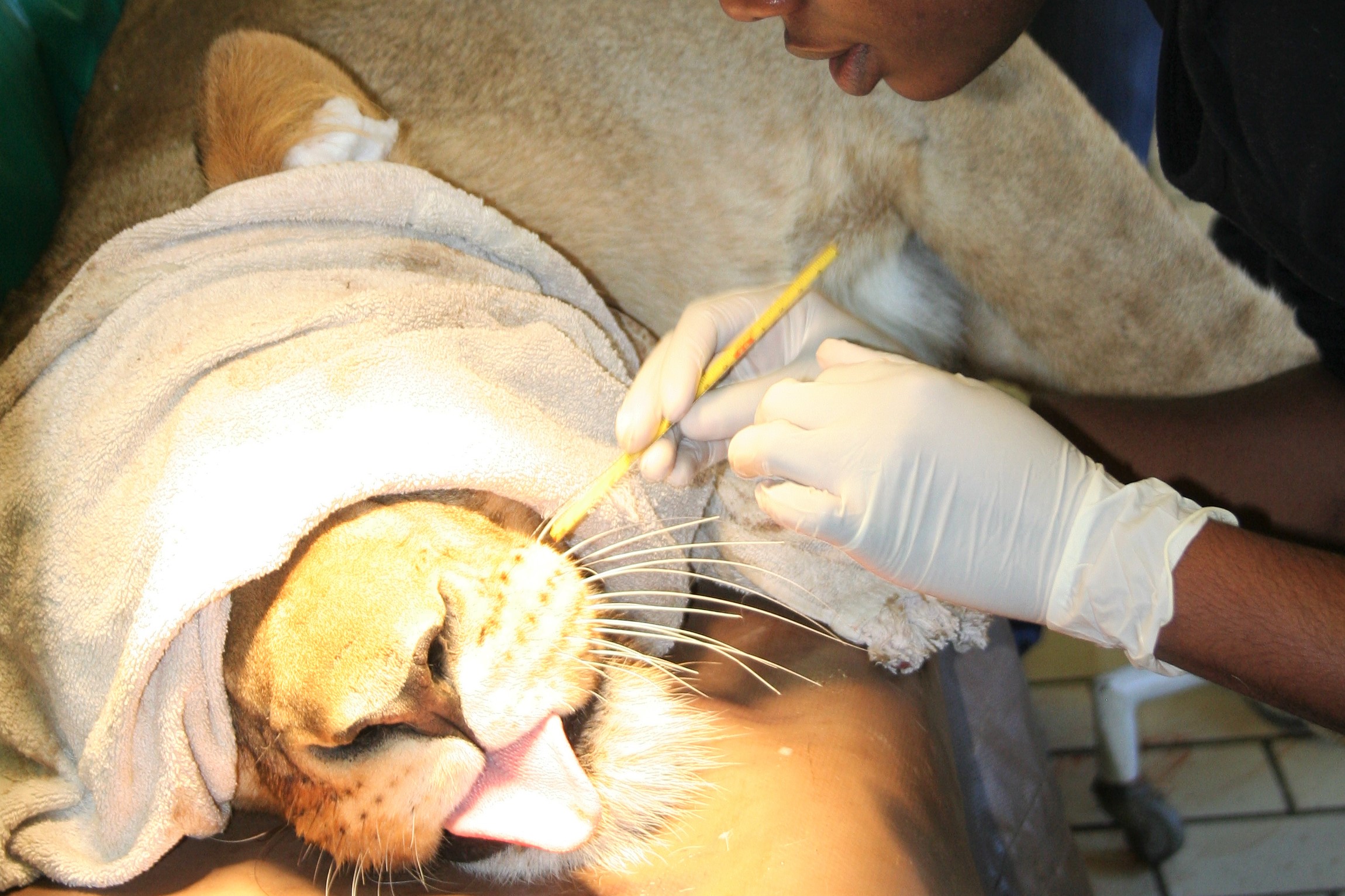 World Wildlife Day is celebrated on 3 March. This year the spotlight falls on the world’s big cats. New research by South African researchers have shown that the details trapped in a lion’s whiskers provide minute detail about the type of animal that has been on its menu. They were also able to tell at what pace the animals’ whiskers grew per day.

This is a free-to-share article (as is all other Scibraai copy) by Engela Duvenage. Feel free to use it on your site or in your publication, with credit to Scibraai.
The details trapped in a lion’s whiskers provide tell-tale clues about the type of animal it has eaten in recent months. That’s what South African researchers found out when they tested whether a method called stable isotope analysis – which was previously used successfully to find out more about the feeding habits of sea otters and European badgers – could shed more light on the diets of lions and leopards.

Within the bigger picture, such information can be used to strengthen big cat conservation. On a smaller scale, the method allows scientists to estimate just how quickly the hairs on the side of a lion’s face grow – 0,65 millimetres per day, to be exact. That would work out to about 24 centimetres per year.

The study was conducted by two researchers from the Department of Conservation and Marine Sciences from the Cape Peninsula University of Technology, Ruwimbo Mutirwara and her supervisor Dr Frans Radloff. They received assistance from Dr Daryl Codron of the National Museum in Bloemfontein. Their findings were published in the journal Rapid Communications in Mass Spectrometry.

“It’s not too far-fetched to think that there might come a day that there are no more lions or leopards left in the wild for our children to photograph,” Dr Radloff explains the reasoning behind the study. “To protect them better in the wild, we need to know what they eat, so that we can ensure that enough of their preferred prey choices are available.”

Zoologists have a reasonably good idea of ​​what lions and leopards generally eat in a particular area. They do not however know to what extent individual cats – just like people – have preference for specific prey species.

“If there is appreciable specialization between individuals, conservationists will have to ensure that enough of such prey species are available to hunt in our natural areas, to help conserve and protect specific groups of lions and leopards,” says Radloff.

First, she had to wait until four lions and one leopard in the National Zoo in Pretoria were anesthetised as part of their regular medical examinations. Then she carefully plucked one whisker per animal. Six months later, when the particular whiskers had regrown to around 13 centimeters, Mutirwara harvested them again. These she then took to the lab to painstakingly cut up in hundreds of minute 1 mm sections. Some weighed not more than 0,007 milligrams – much less than a flea!

Mutirwara was in search of specific clues or markers along the shaft of each whisker. Four times during the six months’ regrowth period, the cats were fed giraffe meat instead of their normal diet of chicken and beef. This change to their menu was laid down in four easily recognisable variations or markers in the isotope values along the length of their whiskers (see explainer below).

Thanks to mass spectroscopy, Mutirwara was able to pick up at what lengths along the hair shaft these changes occurred. The distance between each of these “giraffe is on the menu” days was then used to calculate the speed at which the hair grew.

They now know it happens at an average rate of 0.65 millimeters per day.

“The whiskers of the leopard and four lions used in the study grew at almost the same rate, and not even the two pregnancies of one of the females in the study affected it,” explains Mutirwara.

More importantly, the CPUT research showed that it is possible to use stable isotope ratio analysis of whiskers to find out what leopards and lions eat. They also now know that a whisker does not grow at a constant rate. Growth is faster when the whisker starts out and slows down as it becomes thicker. However, the growth rate of the last six centimetre (the section closest to the cheek) of a whisker longer than 10 cm is more or less constant and contains about 92 days’ worth of data about the diet of a lion or leopard.

“When researchers want to find out what a specific animal eats, they usually have to look closely at its dung, follow it for days or track it. The use of isotopes now makes life just a little bit less labour intensive for scientists,” says Radloff, who notes that the use of isotopes to gather information about animals’ diets was first pioneered through studies on sea otters and Eurasian badgers.

Once digested and taken up in the body, all the water and food that animals and humans consume leave nanoscale tell-tale bits of detail behind in their hair, flesh and bones. One such clue is the isotopes of molecules such as carbon found in abundance in different animals.

In general, the atomic mass of various isotopes of a particular element differ depending on the number of neutrons in their atomic nuclei. This difference is measured with the help of a mass spectrometer. This piece of lab equipment is able to measure the masses of isotopes within a sample by converting or ionizing (also known as charging) each one.

The isotope ratio of water, plants and animals found across the globe differ. Water in South Africa will not have the same isotope value as in England, for instance. Scientists have been using these telling differences for instance to analyze the teeth of prehistoric animals. It provides them with clues on what the animals ate, and the areas in which they once roamed.

The carbon isotope of tissue from herbivores that live in tropical savanna regions depends on what kinds of plants (grass versus shrubs and trees) they eat. A so-called low carbon-12 versus carbon-13 isotope ratio (known as the C₃ ratio) shows that the animal fed on bushes, shrubs or tree leaves. When this ratio is relatively high (the so-called C₄ ratio), they are grazers.

The specific ratio is predictably transferred or replicated throughout the different levels of the food chain. The ratio at which it occurs in the fibres of a lion’s bones or hair allows scientists to deduce what species of herbivore the Lion King had for breakfast. If its tissue has a high (C₄) carbon isotope value, it most probably hunts grazers like buffalo or zebra. A low ratio (C₃) indicates that it prefers browsers such as kudu and giraffe.

According to Radloff they knew that the zoo lions used in their study are fed beef and chicken largely fattened on grass and maize (with a high carbon isotope value).

“Therefore, the whiskers we harvested first had a continuous high carbon isotope ratio attached to them,” explains Radloff.

The subsequent change to their diets on four occasions during the six months caused a clear change in the isotope value with which the whiskers were marked.

Explainer: What’s behind the rabies outbreak in SA?