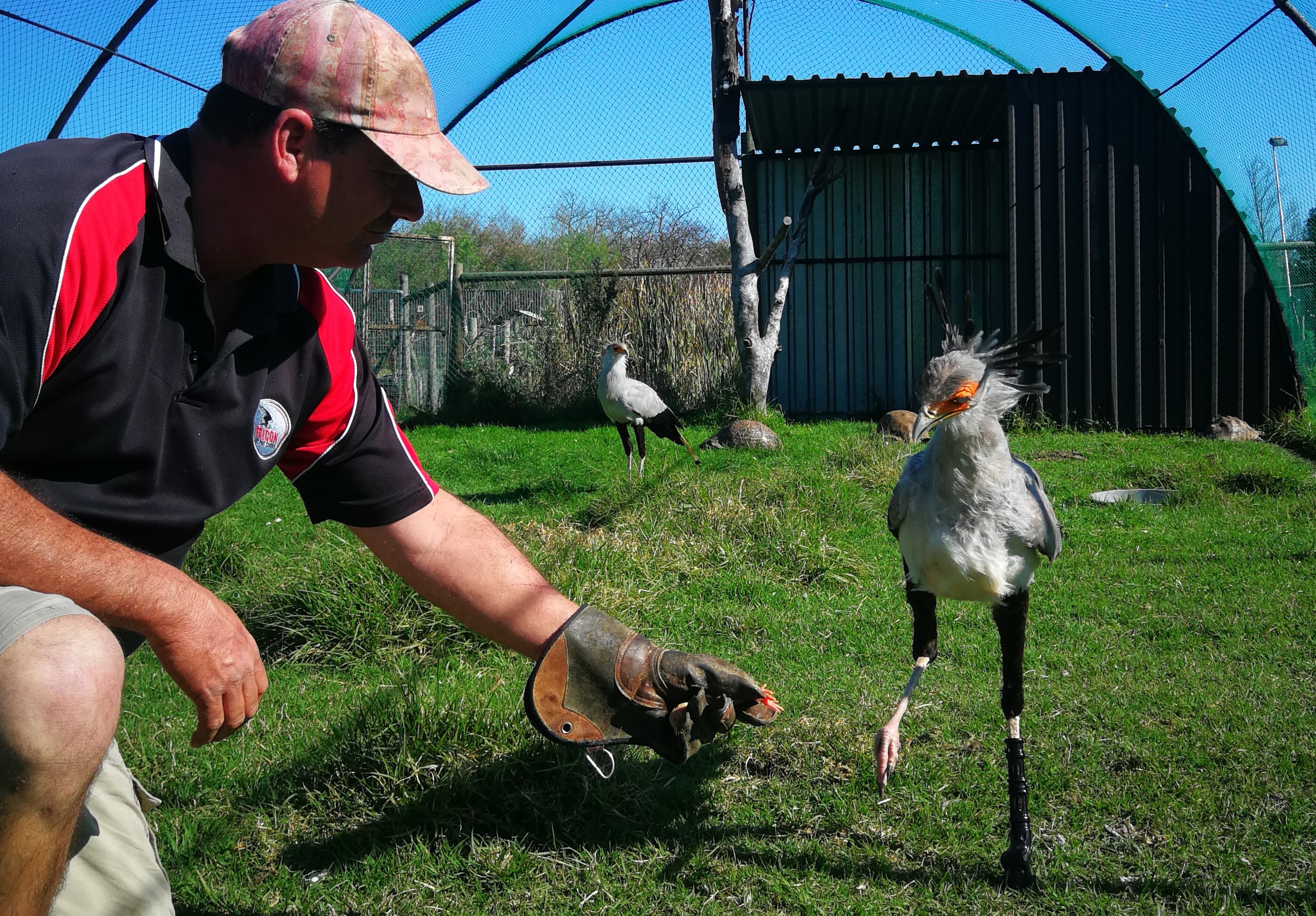 A secretary bird called Legs is the first raptor in South Africa to sport a 3D-printed prosthesis. It was designed by some of the South African team members involved in the recent development of the world’s first 3D-printed middle ear bones.

Scibraai visited Eagle Encounters Wildlife Rehabilitation and Conservation Centre  at Spier Wine Estate near Stellenbosch a week after the artificial carbon fibre leg was first fitted, and watched how the bird quite happily walked around with only the slightest of limps to be seen. The bird even performed the type of kicks that are typical of its kind and carries its full weight on the substitute leg.

At first glance, the prosthesis looks like a leg brace. It does not end in a claw, but in something that resembles the piece of black rubber that one often finds at the bottom of the legs of a chair or table. It is hinged at the ankle and allows for some movement.

According to Hank Chalmers of Eagle Encounters, Legs immediately took to her new lightweight carbon fibre prosthesis. When it was removed a week after it was first fitted, Chalmers was very glad to see no signs of chaffing or any other injury.

Legs has been a resident of Eagle Encounters for the past four years. According to Chalmers, she was brought to the rehabilitation facility after being trapped in a snare. Her foot was so badly injured and infected that it had to be amputated. Since then the bird has had to make do with one leg being about a hand length shorter than the other and has hobbled around on the remaining stump.

Last year, avian veterinarian Dr Coetzee de Beer of the Center for Avian, Reptiles and Exotics (CARE) in Klapmuts near Paarl decided that it was time to give Legs another chance. De Beer had by then already worked on other animal related projects with the Bunnycorp 3D printing design team, and therefore approached them for help.

Earlier this year, Bunnycorp’s Philip van der Walt was one of the 3D printing experts involved in a world first – the transplanting of 3D printed middle ear bones by Prof Mashudu Tshifularo of the University of Pretoria.

In a blog post on the Bunnycorp website, he explained more about what went into the design and manufacturing of the prosthesis, and the partners that made it possible.

According to Van der Walt, the major difference between the German design and that with which Legs has been fitted is that the latter does not have any padding. “We considered padding inside the leg but eventually decided to try a direct fit with breathing and draining holes first,” he explained.