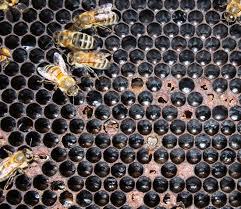 Did you know that nine in every ten honeybee hives found in the Western Cape are used to pollinate local agricultural crops and produce? And that this valuable function in the food production cycle is being threatened by American foulbrood disease (AFB), which some beekeepers call “the worst of all bee diseases”?

Indeed, says commercial beekeeper Brendan Ashley-Cooper, the local agricultural economy relies heavily on the serves that honeybees provide. In the Western Cape 88% of all bee hives are used for the pollination of among others fruit trees and vegetable crops. That’s significant, especially compared to Australia where only 28% of hives are used for this purpose.

“Without pollinating bees, many farming practices are unlikely to survive, unless we also start doing pollination by hand as the Chinese do,” warned Ashley-Cooper at the recent HORTGRO Science technical symposium.

Ashley-Cooper, who represents the Western Cape Bee Industry Association, highlighted the epidemic proportions that American foulbrood disease is taking on in the province. Unfortunately, there’s still no sign that local bees have a general tolerance towards this disease, which kills honeybee larvae and ultimately cause the collapse and death of the hive.

The first AFB outbreak was seen in 2009 in South Africa but was relatively contained. However, in recent months its spread has snowballed. According to Ashley-Cooper, most commercial beekeeping operations are now likely to be AFB positive. This is already the case for up to 10% of recently trapped swarms in the Boland and Overberg. It has been noted in hives from Vredendal and Langebaan on the West Coast to Tokai, Hout Bay and Kraaifontein in the Cape. It is found in the Overberg, the Little Karoo and the R62 and around Albertinia on the N2 in the Southern Cape.

“We must expect the worst, because the disease will not miraculously disappear,” Ashley-Cooper warned.

He called on producers to only use the services of registered beekeepers who keep to the strict control and sanitation measures of the beekeeping industry to curb the spread of AFB. The only effective way of getting rid of it is to thoroughly destroy all infected hives, colonies and swarms. Antibiotics are seen as mere short-term measure to keep pollinating bees alive. Much work still needs to be done to select natural populations that are disease resistant.

AFB has bugged beekeepers since the time of Aristotle. It is caused when the Paenibacillus larvae bacteria infect and kill developing honeybee larvae. Ultimately it causes the collapse and death of the hive. Although adult honeybees cannot be infected, they carry the spores to the larvae that they help to feed in the hives.

Beekeepers now have to conduct regular inspections to ensure that their hives are not infected. If they are, the hives and swarm have to be destroyed completely. The bacteria spores are extremely hardy, and can survive up to 60 years and in temperatures ranging from -40 degrees Celsius to 160 degrees Celsius. They can only be killed through high fire or irradiation treatment.

A hive is infected when dead larvae are noted within the sealed cells of a hive. The larvae remains turn from white to dark brown and black, and becomes slimy, mucus-like and ropy. The capping of the cells differs in colour and shape from those in healthy hives. They become sunken, concave, black, holed and moist. In the final stages a black scale can be seed at the base of a cell, often with a pupal tongue included.

Ashley-Cooper stressed the value of looking after wild swarms. They are the source of new genetic material to keep hives going and for beekeepers to replenish their empty hives.