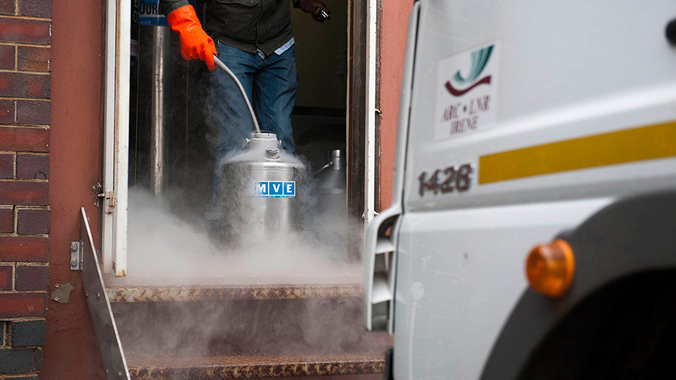 Gloved hands hold a long syringe. Fluorescent lighting blinks off the white surfaces as Masindi Mphaphathi, an animal researcher at the Agricultural Research Centre, gently pushes the plunger. He is demonstrating, in the back of the ARC’s mobile clinic, how to artificially inseminate a cow.

“The idea is to provide [livestock reproduction] services for farmers in the field,” says Professor Tshimangadzo Nedambale, ARC’s research team manager. “It improves the pregnancy [rate] of the cows and some [farmers] can’t provide bulls.”

Livestock farming is a mainstay of South African agriculture but it is difficult for emerging black farmers to break into the market, where a bull costs at least R5 000. Without new genetic material being introduced to the herds of smallholder farmers, the animals can become inbred, compromising their health and ability to reproduce.

In an article based on his presentation to the 11th world conference on animal production, Dr Michiel Scholtz, a scientist at the ARC Animal Production Institute, writes that “the estimated calving percentage for beef cattle is 35% in the communal [smallholder] sector and 62% in the commercial sector. More emphasis should therefore be put on increasing fertility.”

Nedambale says that this is why the ARC, which is funded by the departments of science and technology and agriculture, forestry and fisheries, developed the mobile laboratory – “for artificial insemination and embryo transfer” to improve animal fertility in rural areas, and for smallholder and emerging farmers.

A computer monitor, showing hundreds of tadpoles wiggling furiously, stands on one of the counter tops that runs the length of the truck. Nedambale points to the screen.

“We’re also analysing the bulls [semen when we are] in the field and are able to give [fertility] results immediately … [Taking samples] from the field to the lab takes time and compromises the quality.”

The computer system is also equipped to process the genetic material and samples from other livestock, such as goats, poultry and sheep.

Mahanjana, who identifies himself as being an emerging black farmer, says that the difference between the white commercial farmers, “who often live hand-to-mouth” and are struggling with large debt, and black farmers is that “we are first generation. The commercial white farmers know what is required.”

He says that this sort of assisted reproduction technology (ART), which includes artificial insemination and embryo transfer, could help emerging farmers.

But it is unlikely to be of use to smallholder subsistence farmers. The majority of the poorest farmers are part of a village system, which is isolated and has limited resources, and farmers do not have control over their land.

Professor Peter Irons, head of the University of Pretoria’s department of production animal studies, says: “One of the major problems is that in … communal farming, there just isn’t fencing. Any kind of controlled breeding programme is impossible. If you can’t keep different herds separate, you can’t keep a bull from covering his daughter.”

The mobile laboratory was born out of the Nguni ART project, a R24-million collaboration, between the ARC, the Technology Innovation Agency (TIA) and the government, and was launched in 2012. The aim of the project was to aid Nguni cattle breeding and to increase red meat production in rural areas.

Practical challenges
The success of this project was eclipsed by the ructions at the TIA, which saw the chief executive officer, Siphiwe Duma, and the chief financial officer, Barbara Kortjas, being fired. It was also reported that one of the project’s arms was located in former TIA chairperson Mamphele Ramphele’s home community of Terbrugge in Limpopo.

Asked about the issues at the TIA, Nedambale says: “TIA had its administrative problems. From our side, we’re still running the programme.”

The mobile laboratory arose from the practical challenges faced in the first pilot of ART in Vuvha, Limpopo, says Nedambale.

The Mail & Guardian was at its launch in 2012 in the village, which is more than an hour from Thohoyandou, the administrative centre of the Vhembe district municipality. With bad gravel roads and no cellphone reception, the trip is not easy.

At the time of the launch, a resident, Tshianeo Mathidi, said: “We are using the technology already. It helps us save costs instead of buying expensive bulls.”

But working with this sophisticated technology so far from urban centres was difficult, says Nedambale. He laughs. “In the pilot project, we used a person’s house to do the work.”

Now, a customised Mercedes-Benz light truck, costing about R1.6-million, houses a laboratory, with its own nitrogen tank, purified water and refrigerator. The solar-panelled roof provides the electricity to power the laboratory, although there is a back-up diesel generator for rainy days.

The laboratory seats four researchers in the cab. Nedambale points out that the vehicle’s higher suspension and broad tyres prevent it from getting stuck on the rural roads or in fields.

Lus for more? Read the original at Mail & Gaurdian.

A life dedicated to fungi – and academics