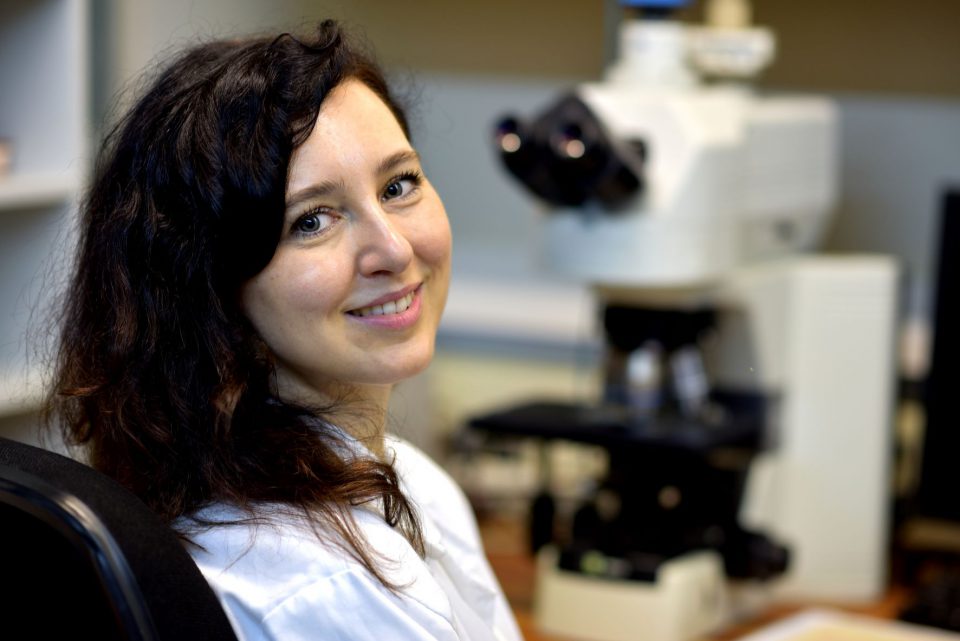 Your chances of spotting a yellow-bellied sea snake (Hydrophis platurus) while boogey boarding or surfing are slim. It is after all the only sea snake species in the world that spends its whole life in the open ocean. It even gives birth at sea.

These brown and yellow snakes stay underwater for three hours at a time. They can swim backwards – the only one of the world’s 60 sea snake species that can do that.

They carry with them a host of life of the microscopic kind, notes North-West University marine biologist, Dr Roksana Majewska.

She’d know, as she recently discovered a new species of one-celled alga or diatom on yellow-bellied sea snakes. The discovery of Nagumoea hydrophicola was announced in the scientific journal Diatom Research .

The exciting find was part of her larger study about the tiny, so-called epizoic, animal-associated creatures that live on such snakes.

Dr Majewska investigated the skin and barnacles found growing on three museum specimens of yellow-bellied sea snakes. These are part of kept in the Port Elizabeth Museum in Gqeberha.

Nagumoea hydrophicola is more than just a new find, unknown to the scientific world. It is also the first such type of algae ever documented to grow on a sea snake.

Get to know yellow-bellied snakes

Yellow-bellied sea snakes is the most widely distributed of its kind. It typically swims in tropical open waters across the Indo Pacific Ocean. The snakes are found from the waters off the eastern African coast to the tropical eastern Pacific. According to the website Animalia, such snakes have been seen in colder waters along the coasts off southern California, Tasmania, and New Zealand. Some have also been seen in the Agulhas Current, along the coasts of South Africa and Namibia.

“From aboard a ship or boat it is very difficult to spot them. Their upper body is dark. They hide in floating seaweed, or pretend to be them,” says Dr Majweska.

Each to their own (surface)

She believes her recently discovered diatom species might be quite unique to the yellow-bellied sea snake.

There’s nothing funny about such an idea, though.

She noted in a recent paper in Diatom Research that diatoms grow on a wide variety of different hard-surfaced objects and organisms. Many species and sometimes even entire genera seem to prefer very specific surfaces and even specific animal hosts.

These have probably effectively adapted over time to make use of sun-lit hard surfaces that are generally scarce in oceans.

Various epizoic diatoms seem to be consistently associated with a specific group of animals, if not species. This implies either geographical or ecophysiological isolation.

Many new diatom species therefore still could be discovered on as yet unexplored host species.

“The discovery and ecology of the new taxon is peculiar considering it was found abundantly on museum sea snake specimens collected from different locations in South Africa 23 years apart. And, so far, nowhere else in the world. The species seem to be specialised to live on sea snakes. This is a substratum that is not accessible to many other micro- and macro-organisms.

A career in diatoms

“I have been working on animal-associated diatoms for about 7 years. I plan to continue the research on diatoms growing on sea snakes from South Africa and beyond,” says Dr Majewska, who has been associated with NWU’s Unit for Environmental Sciences and Management since 2016.

“It has been thrilling, completely new, and very satisfying research. It lies at the intersection of disciplines such as microbiology, zoology, and conservation. It initiated an entirely new field of science.”

Her plans make sense, given as it seems there’s still a whole (minute) world still waiting to be discovered.

Dr Majewska has already played her part in these endeavours. She has described new species found on sea turtles, barnacles, sponges and kelp in South African waters. To do so she has worked with geologists, biochemists, palaeontologists and even scientists looking for new medicines.

In honour of her work, a whole new genus of diatoms, Majewskaea, was named after her in 2020.

She started working on sea turtle diatoms through a contact that she made during an expedition to Antarctica as part of her first PhD.  (She is currently working on a second PhD, in biochemistry).

Quite unexpectedly, she found a whole new community of diatoms only found on sea turtles.

“They are nearly omnipresent. An estimated 200 000 to 2 000 000 species inhabite aquatic and terrestrial habitats, including hot and cold deserts. Diatoms are also highly unique.”

Water-living diatoms are microscopic in stature. The biggest ones are about the size of one of your hairs.

New discoveries are constantly being made. It is thanks to inquisitive minds such as that of Dr Majewska and because better light microscopy and scanning electron microscopy equipment are now available to  view the organisms in the greatest detail.

Although minute, en masse diatoms, as all good algae, create a slimy biofilm that covers a surface.

However, diatoms cannot be frowned upon. They play a very important part in the cycle of life on earth. Many species are a primary source of food for anything from waterliving insects and tiny fish and the zooplankton on which gigantic whales feed.

They help you breathe too.

The website, Diatoms of America, provides very interesting titbits on diatoms. For instance, these tiny organisms produce 50% of the air we breathe. They remove carbon dioxide from the atmosphere through a process called carbon fixation. Oxygen is released after many further processes.

As the site says: “We breathe the oxygen that diatoms release”.

Diatoms are the only organisms on the planet with cell walls made of transparent, opal-like silica. Under a microscope, diatom cell walls look quite pretty. That’s thanks to the intricate and striking patterns of the silica.

Rock containing large amounts of fossilized diatoms (and therefore their left-over silica) are called diatomite, kieselgur/kieselguhr or diatomaceous earth. It can crumble into a fine white powder. It is mined and used in non-toxic insecticides, toothpaste and food supplements. It is also used to filtrate anything from  swimming pool water and fish tanks to beer and wine.

Alfred Nobel, the man behind dynamite and the Nobel Prizes, discovered that diatomite makes the nitroglycerin used in the explosive more stable, and therefore safer to handle and transport.

“Diatoms are an important component of fossil fuels. Diatoms therefore constitute a potential sustainable and efficient source of biofuels. Unlike biofuel made from crops, it does not compete with food production.”

The very many diatoms each have specific preferences about where they grow. This is another bonus, says Dr Majewska. “They are efficient bioindicators of pollution, climate change, and overall quality of habitats.”